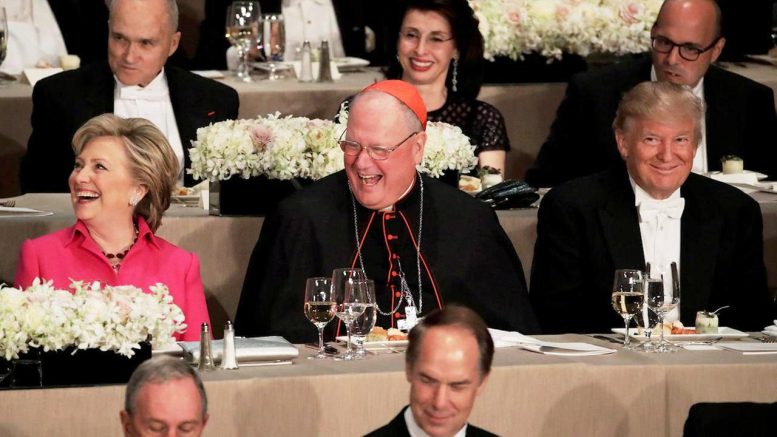 The presidential candidates shared a rare moment of warmth in a campaign marked by its contentious nature.

The presidential nominees exchanged jabs Thursday night at the Al Smith Dinner, but when the cameras were off, Hillary Clinton and Donald Trump also offered each other well-wishes and shared a moment of prayerful reflection.

Recalling a private moment with the two candidates, Cardinal Timothy Dolan, archbishop of New York, told NBC’s “Today” show Friday of a “touching” interaction between the the presidential opponents at the charity fundraiser in New York City.
“After the little prayer, Mr. Trump turned to Secretary Clinton and said, ‘You are one tough and talented woman,'” said Dolan said, who was seated between Clinton and Trump on the dias for the white-tie event. “He said, ‘This has been a good experience, this whole campaign, as tough as it’s been.'”

According to Dolan, Clinton returned the compliment and called for them to come together after the election to heal the country in the wake of a particularly divisive election.

“She said to him, ‘Donald, whatever happens, we need to work together afterward,'” Dolan said.
The dinner honors Smith, the first Catholic presidential candidate, and is often the last time the nominees see one another in person before an election. It raised a record $6 million for the city’s needy children. This year, the event took place a night after Clinton and Trump sparred at their third and final debate, a contentious evening that seemed to leave lingering sore feelings on display at the dinner Thursday.

Both candidates, as is tradition, delivered comedic remarks meant to lightly roast their opponents and also themselves.

On Friday, Dolan said the two candidates, in private, are unsurprisingly “kind of awkward together.”

“The purpose of the evening is to break some of the ice, and thanks be to God, it works,” he said.

The exchange behind the scenes, meanwhile, shows “the evening at its best,” he said.