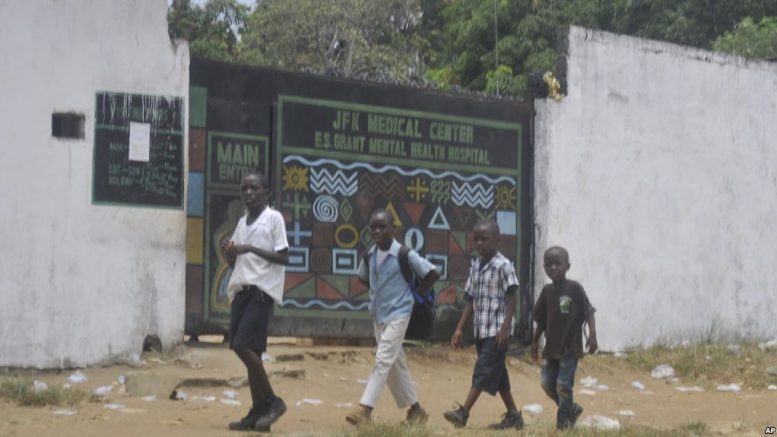 In this photo taken Friday, March. 31, 2017, Children walk past JFK Medical centre in Monrovia, Liberia. Ebola centers. Drawn-out deaths. Communities torn apart. Survivor’s guilt. Patrick Fallah says his memories of the days when the virus swept through Liberia are so awful that he sometimes has trouble focusing on the present. (AP Photo/ Abbas Dulleh)


MONROVIA, LIBERIA — Drawn-out deaths. Communities were torn apart. Survivor’s guilt. Patrick Fallah says his memories of the days when the Ebola virus swept through Liberia are so awful that he sometimes has trouble focusing on the present.

“Sometimes when I have a flashback of the death of my son and others who died in the Ebola treatment unit, I don’t want to speak to people. I grieve so much that my mind is not really on what I am doing,” said Fallah, 30, who lost his 8-month-old son and stepmother and is president of the National Ebola Survivors Network of Liberia.

The trauma of the world’s deadliest Ebola outbreak, which killed more than 11,300, mostly in Liberia, Sierra Leone, and Guinea, has left many survivors fighting a battle some worry will never end.

But Liberia, one of the world’s poorest countries and with just one psychiatrist, has announced the ambitious goal of expanding access to mental health care to 70 percent of its population in the next few years.

The World Health Organization declared an end to the Ebola outbreak in June, estimating that more than 10,000 people who had been infected have survived in the three West African countries, including more than 4,000 in Liberia.

As the world’s attention has turned to other crises, many Ebola survivors still face the psychological consequences of the epidemic, feeling guilt over their pasts and worry for their futures without resources to deal with the pain.

Mental health is often an expense far beyond the reach of impoverished countries. Liberia is still struggling to rebuild its basic health services after more than a decade of back-to-back civil wars that left a quarter-million people dead, with many killings carried out by drugged, underage fighters notorious for hacking off survivors’ limbs.

Then Ebola arrived, frightening Liberians with its lack of a cure and its transmission through contact with body fluids. Many people became too scared to touch others or offer comfort as the death toll grew.


Now Liberia’s government has announced its ambition to expand mental health care access to its more than 4.2 million people, with help from the U.S.-based The Carter Center.

“After the civil war, people didn’t go through enough counseling. You have people already going through post-traumatic depression. Then Ebola came, and that built on what was already going on,” said Dr. Francis Kateh, Liberia’s deputy health minister, and chief medical officer.

Last month, 21 clinicians specializing in child and adolescent mental health graduated from the training. They join 187 mental health professionals who have been trained by the center since 2010 to work in prisons, with refugees or in other settings and are based in primary care clinics and hospitals around the country.

The Carter Center hopes to replicate its program in other countries, including Sierra Leone.

But educating the public will take time, the new mental health workers say.

“There are many people living with mental health problems in Liberia without knowing they are,” said one of the new specialists, Theophilus A. Joe.

Stigma remains around mental health issues, said Musulyn Massaqoui, a registered nurse and another recent graduate. Most people come to clinics only for physical issues, she said.

Ebola survivors often have hearing and vision problems, joint pain or chronic fatigue, according to the medical aid charity Doctors Without Borders. Many also are shunned by their communities and family members, making them vulnerable to mental health issues.

Children left orphaned by Ebola or who watched family members die are especially challenged, said Fallah with Liberia’s survivors’ network, which has about 1,800 members.

“They continue to have depression. They are still thinking about their parents,” he said. “Sometimes when they sit in the class, they don’t concentrate.” During the holidays, some feel so neglected that they “want to take up a knife to kill themselves.”

Some of Liberia’s newly trained mental health workers have been placed in schools and orphanages to lessen the chances of stigma, said The Carter Center’s mental health program director, Eve Byrd.

That approach is critical, she said. “If you address childhood trauma early, you’re most likely to decrease symptoms of illness as the person ages.”

Stigma in Liberia has proven to be deadly. In March, an Ebola survivor who made the cover of Time magazine for her work as a nurse during the outbreak died when she experienced complications after childbirth and the nurses on duty were too afraid to touch her.
– AP