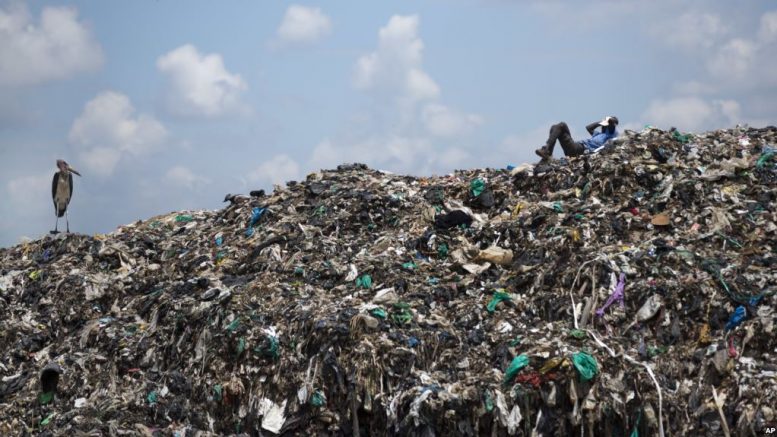 FILE - A man who scavenges for a living takes a rest next to a Marabou stork on top of a mountain of garbage at the dump in the Dandora slum of Nairobi, Kenya, Nov. 12, 2015.


NAIROBI — The Kenya Association of Manufacturers says the government’s directive to ban plastic bags beginning in September will hurt more than 170 companies and put at least 60,000 people out of work.

The problem is not plastic bags, but consumer behavior, says Phyllis Wakiaga, the association’s chief.

“Issue of waste management is an issue we must admit as a country because all of us are responsible for it,” Wakiaga said. “How we manage our waste at the individual level, at a household level, at the business level, is a concern that all of us. As Kenyans, we should be part of the solution in charting the way forward.”

Many countries in the world, including Kenya, have faced challenges in disposing of the used bags. Many are thrown in the garbage and water streams, though the waste does not break down.

Geoffrey Wahungu, the National Environment Management Authority director general, says the best way to deal with the plastic bags issue is to ban them.

“It takes a generation to change consumer behavior,” Wahungu said. “We do not have that time since there are alternatives, and we do not have to deal with this problem all over until it gets out of hand. We think we need to ban plastic and explore alternatives.”


According to the United Nations environment agency, Kenyan supermarkets use 100 million plastic bags every year. The agency has welcomed the government ban.

The ministry of environment said it had banned the manufacture, use and importation of plastic bags used for commercial and household packaging.

The government tried to ban plastics bags 10 years ago, but the ban failed to be implemented after resistance from the public and manufacturers.

Wahungu says the ban will work because the population is better informed and more supportive.

“In the previous times, Kenyans had not seen the … pollution effect of plastic,” Wahungu said. “Right now, plastic has encroached into the lives of Kenyans. The pollution from plastic and even economic losses from clogging of drainage, flooding, killing livestock; Kenyans are tired of plastics.”

Tanzania and Rwanda have banned plastic bags and called for the total prohibition of them in East Africa.