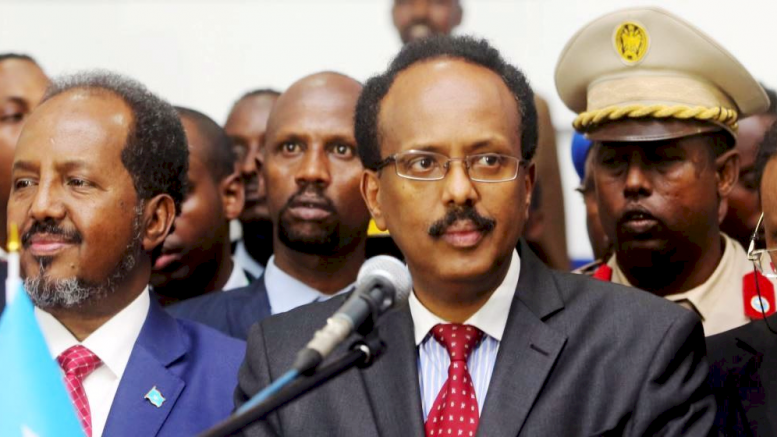 
Somalia’s new president says he will work to have his country removed from the list of nations whose citizens were — and may yet be — barred from entering the United States.

Mohamed Abdullahi Mohamed, more commonly known as “Farmajo,” told VOA of his plans in an phone interview late Thursday, a day after his unexpected victory in the Somali presidential election.

“It is part of my responsibility to talk this issue with the U.S. government by conveying our message to the president and his government that the Somali people are really good, hard working people,” Farmajo said. “They raise their families in the United States. So we will see if he can change that policy and excludes Somalis from that list.”

The future of the so-called “immigration ban” is in doubt after the U.S. 9th Circuit Court of Appeals upheld a judge’s restraining order against directives that temporarily halted refugee resettlement programs and barred visitors from Somalia and six other Muslim-majority countries.

President Donald Trump has vowed on Twitter to challenge the decision, setting up a possible showdown in the Supreme Court.

Farmajo is a dual U.S. and Somali citizen who has spent much of his adult life in the United States, mostly in the northern city of Buffalo.

That didn’t stop Somali parliament members from choosing him Wednesday over incumbent leader Hassan Sheikh Mohamud and 20 other candidates to become the nation’s 9th president.

Farmajo told VOA his first priority is to appoint a new prime minister who will be in charge of dealing with Somalia’s security problems and a developing humanitarian crisis.

“There is a huge drought everywhere in Somalia which definitely will produce a famine,” he said. “We have to appeal to the international community to provide humanitarian assistance to those affected people in Somalia.”

Following two seasons of weak rainfall, the country is experiencing severe drought and the United Nations has warned of the potential for a repeat of the 2011 famine that killed more than 250,000 people.

He said he expects that the new prime minister can assemble a new cabinet in 30 days, and said they will roll out a plan of action in the coming 100 days.
The new president admitted Thursday he is still adjusting to his new role. 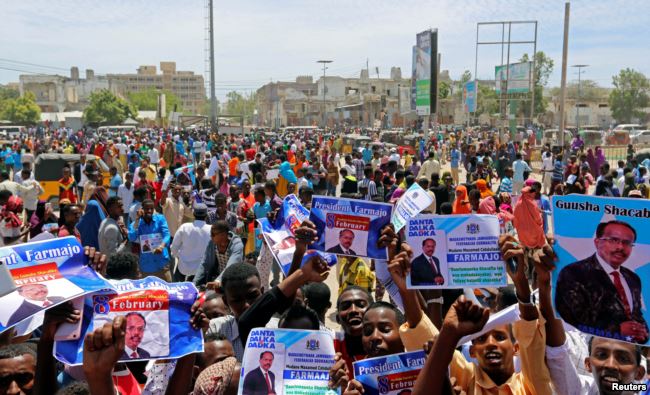 Farmajo previously served as prime minister for eight months in 2010 and 2011 and has remained extremely popular since then, said Sakariye Cismaan, a London-based Somali political analyst.

During his time in office, Farmajo was credited with ensuring that government workers and soldiers were paid on time, cracking down on corruption and helping liberate territories from al-Shabab.

“The Somali people really trust him and believe he will put the common good before his own self-interest,” Cismaan said. “The whole country is extremely optimistic now.”

Wednesday’s election was conducted by the 328 members of the two houses of parliament. This is different than previous elections where clan elders played a significant role in choosing the president, Cismaan said. He said it was also more representative of the will of the people.

“It is the most diverse [electorate] in terms of gender and age, and I think they were sick of the corruption that was taking place throughout the election season and decided to vote for the candidate the public actually wanted,” he said.


Cismaan said Farmajo’s main concern will be the security situation in the country. Although al-Shabab has been driven out of the major population centers and controls less than 10 percent of the country’s territory, the Islamist militant group remains a potent threat, bombing hotels in Mogadishu and attacking military bases.

Wednesday’s election was moved to Mogadishu’s Aden Adde International Airport, one of the few secure places in the country, following threats from al-Shabab and worries about security at the original venue, the Mogadishu police academy.

“Security is going to be his biggest challenge and the main issue that he will ultimately be judged on,” Cismaan said. “But he really has a golden opportunity here. He has the entire population behind him who are now feeling more patriotic than ever. He can use that support to delegitimize al-Shabaab.”
– Salem Solomon I VOA