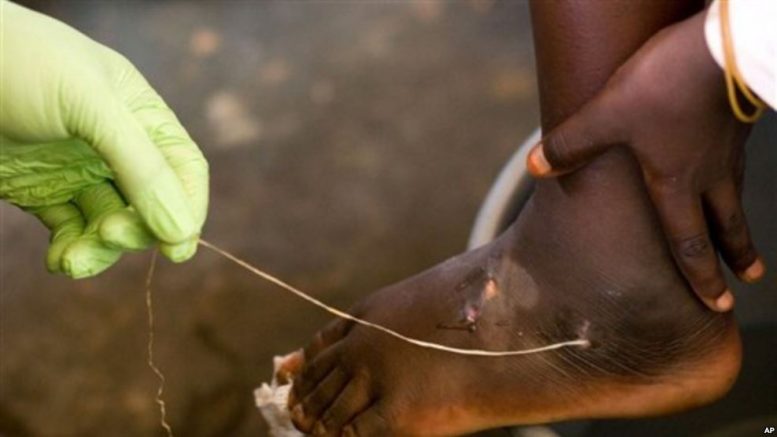 FILE - A Guinea worm is extracted from a child's foot at a containment center in Savelugu, Ghana, March 9, 2007.

Guinea worm infections afflicted 3.5 million people 30 years ago but are now endemic only in South Sudan, Chad and Ethiopia, where there were 16 reported cases last year, according to the organization set up by former U.S. President Jimmy Carter and his wife, Rosalyn.

Jimmy Carter, 92, has made the fight against the disease, for which there is no vaccine or medical treatment, a cornerstone of his organization’s work.

“The progress we have seen in restricting Guinea worm disease to these few cases in only three countries is testament to the dedication of people in endemic areas to caring for their health and that of their communities,” said Dean Sienko, the Carter Center’s vice president of health programs.

Guinea worm disease is spread by drinking unboiled, stagnant water containing the larvae. The worms can grow up to a meter long before emerging through the host’s skin; those afflicted with the disease suffer fevers, blisters and extreme pain when the worms emerge.


The Carter Center said the disease is being wiped out through community programs that show people how to filter drinking water and prevent contamination.

Although the global number of cases has declined, one worm can cause 80 new cases after its incubation period of 10 to 14 months, so keeping cases low signals the battle is being won.

The World Health Organization has said the battle to eradicate Guinea worm is being hampered by insecurity; health workers and volunteers often must venture hundreds of miles into lawless areas in countries where the disease is endemic.

Another challenge is that dogs — mainly in Chad, but also in the other countries — are picking up Guinea worm infections, too.