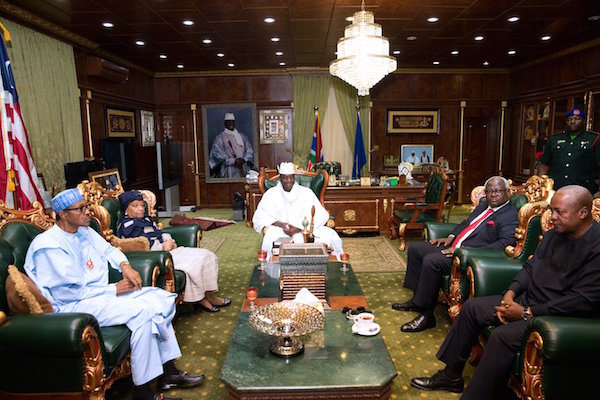 President Buhari, President Ellen Johnson-Sirleaf of Liberia, who is the current Chairperson of the Authority of Heads of State and Government of ECOWAS, President Ernest Bai Koroma of Sierra-Leone and out-going President of Ghana, John Mahama on Tuesday met incumbent President Yahya Jammeh at the State House to try to persuade him to agree "to leave office" after his election defeat.


The clock is ticking by the seconds, minutes and hours. Months are being reduced to weeks of expectations of peaceful transfer of executive power. Soon it will be days to the D-Day.

No one doubts that the people have decided to vote in peace and are expecting a peaceful transfer of executive power.

Nobody expected that the opposition would form a coalition. The impossible, however, became the possible. A formidable coalition was formed.

Few expected a violent-free campaign. The campaign teams, however, rubbed shoulders on the campaign trail, but violence was never the order of the day.

Counting on the spot gave greater transparency and accountability to the electoral process. The results were known by the political parties before they were declared by the IEC. People started celebrating and were cautioned not to do so in public until the IEC made their declaration.


The secrecy of the ballot made it impossible for one to know how people voted. Gambian voters went to the polls without any party identity and cast their votes as individual Gambian citizens without any recognized party affiliation.

The results constituted a victory to all the contenders and the IEC. Their initial acceptance made all Gambians victors. The world hailed the Gambian people for doing what is a rare feat.

Everybody is now waiting for the winner to assume office in peace in order to crown this historical feat that would make all Gambians proud of their citizenship.

The future is waiting to tell the story.