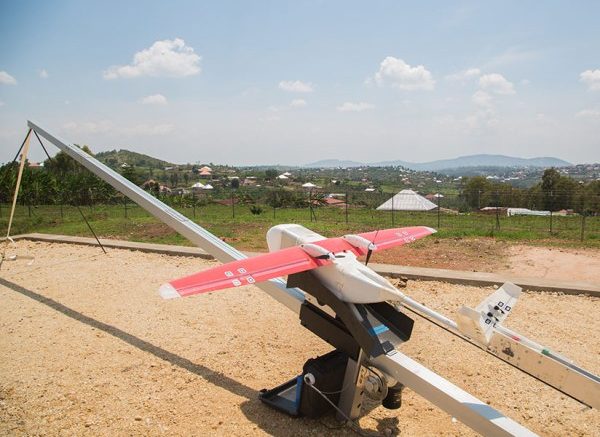 A drone for distribution in Muhanga District.

The government and Zipline Inc, a U.S. – based firm have partnered to improve the urgent medical supplies delivery system.

The first medical supply of remotely piloted aircraft, popularly known as drones, will be launched in Rwanda today. The pioneer project, in Muhanga District in southern Rwanda, will see drones used in delivery of much needed supplies to ensure efficiency and timeliness.

The launch comes nine months after the Government entered into an agreement with Zipline Inc, a California-based robotics firm to build infrastructure for unmanned aerial system to ensure efficient logistical transportation of medical supplies in the country. 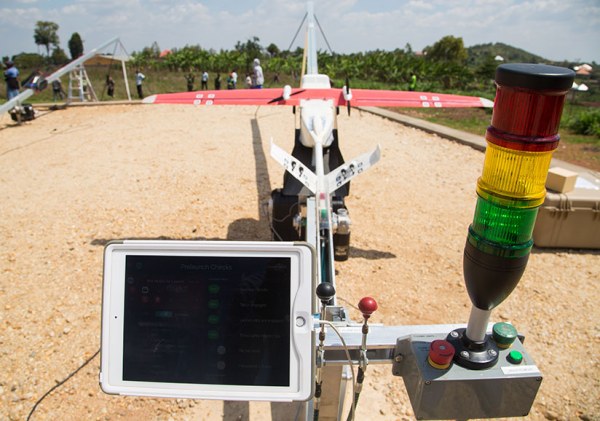 The issue of delivery of medical supplies to the countryside has always been a daunting one for the Ministry of Health.

This happens about twice a week but during medical emergencies, requisition for blood supplies from the National Blood Transfusion Centre could be made up to five times.

Other than the road trip, the blood delivery process requires that lab technicians leave their stations at the facility for the city to put in an order and follow-up till it gets to Kabgayi District Hospital.

At times, the process could require them to spend a night in Kigali, according to Dr Espoir Kajyibwami, the director of the hospital.

The drones are expected to curb such tedious processes to acquire blood as well as medical supplies at up to 21 hospitals across Southern and Western provinces.

Using drone technology will cut down the time taken in delivering blood supplies to about 30 minutes on making an order and will not require staff from the health facilities to leave their stations.

Experts say drone technology presents an opportunity to turn around the quality and efficiency of medical services in remote areas.

With the reduced duration in delivery of blood supplies, medical practitioners expect that patients will get urgent attention and will also enable them respond better to emergency cases.

Dr Kajyibwami told The New Times that the new technology will enable them reduce the time taken to replenish their supplies and respond better to medical emergencies.

After witnessing two delivery tests (on Wednesday and yesterday), he said he was convinced that the hospital would improve efficiency in dealing with blood delivery.

Kajyibwami said drones will also cut costs incurred by the facility in the process of replenishing blood supplies.

“The process currently requires that one drives to Kigali, occasionally spending a night as well as other costs. This will no longer be the case with this technology,” he said.

For the brains behind the project, the nine month duration from the agreement signing to today’s launch has largely been taken up by processes of building the right infrastructure, integrating into the value chains and building partnerships.

This being the first globally that drones have been used to deliver medical supplies, the team involved said that they were faced with a number of challenges which they overcame through partnerships.

Speaking to The New Times from Muhanga yesterday, Keller Rinaudo, chief executive of Zipline, said the process to implement the agreement required them to learn through the process as there is no manual book to go by.

“Doing something for the first time in the world is always hard. There is no precedent, manual or clear rules to go by. This made it difficult for us and the Government. We got through this by partnering and testing new solutions,” Rinaudo said.

Among the steps that the firm took over the nine months was to study and integrate into the blood delivery chain as well as win the confidence of stakeholders such as medical practitioners.

“Our job has been working closely with the Government. We had to understand how to create an ecosystem. We have had to integrate with the blood supply chain, integrate with the airspace and make sure doctors were comfortable with how this was being done,” he said.

“We have been hearing from countries such as the US who want to know how Rwanda is doing this. After we announced the project here, we received interest from almost every government in Eastern Africa and other parts of the continent. There is a huge demand but we are focused on ensuring that this is a success before we go ahead with other projects,” he said.

The project and its ambitions has also attracted international partners, including UPS, an global logistics firm, and Global Alliance for Vaccines and Immunisation (GAVI), a public-private global health partnership committed to increasing access to immunisation in poor countries.

UPS Foundation put in $800,000 grant to support the initial launch of the initiative to explore using drones to transform the way life-saving medicines, vaccines and blood are delivered across the world.

Kevin Etter, global strategy manager and healthcare marketing at UPS, said the project was a lesson on the power of innovation and partnership.

“This is about innovation; there is the technological innovation to be able to fly drones and supply blood. The partnership between government, the private sector and International partners is another big innovation. The third innovation is about the business model to create such as is an elegant solution,” he said.

The success of the project, Etter said, lays a foundation for the 110-year-old firm to build on the innovation in its line of work.

Moz Siddiqui, the manager for innovative finance and Private Sector Partnerships, said with the Government among the committed partners to the project, they had high confidence levels in the project.

“What you have here is an event driven situation, time is always of the essence in such emergencies, and you need to get blood and vaccines to patients on time,” Siddiqui said.

To facilitate the planned development, Rwanda Civil Aviation Authority (RCAA) drafted regulations that were passed by Cabinet this year.

The regulations provide a framework to guide further developments in the technology, as well as other aspects such as port construction.

The process involved consultations with stakeholders in the aviation industry and is also guided by the international civil aviation.