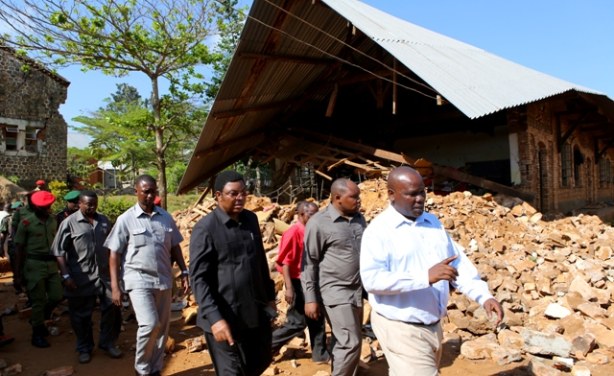 The Earthquake measuring 5.7 on the Richter scale hit the rural Kagera region, killing close to a dozen people.

In Summary
Prime Minister Kassim Majaliwa yesterday arrived in Bukoba to evaluate the scale of the destruction caused by the quake which, according to the Geological Survey of Tanzania, was the most intensive one ever experienced in the country, whose magnitude was 5.7 on the Richter scale.

Bukoba. The number of those who died following the Saturday earthquake in Bukoba
District has reached 16 while 253 others suffered injuries, according to the Kagera
Regional Commissioner, Major General (rtd) Salum Kijuu.

Mr Majaliwa led Bukoba residents at Kaitaba Stadium who thronged to pay their last respects to the departed, offer condolences to bereaved families and solace to those who suffered injuries and loss of property.

He asked the residents to remain patient in this hour of great sorrow and revealed that his office
has already dispatched experts from the Disaster Management Unit to oversee the provision of
humanitarian assistance.

After the public prayers, the Premier made a tour in the areas which
were most affected by the devastating quake. Bukoba Urban MP Wilfred Lwakatare called on
those whose houses survived the tremors to shelter those who lost their homes as leaders pursued
other interventions.

Mr Lwakatare also requested the government to subsidise all construction materials and
equipment in the region to enable the affected to reconstruct or repair their houses, noting that
the earthquake has suddenly deepened the level of poverty in Kagera Region.

Special Seats MP Severina Mwijage was overcome with emotion to the extent that she couldn’t
deliver her message of condolences. Tears flowed freely down her cheeks as she noted that the
magnitude of loss and pain of the wake of the earthquake to the people of Bukoba comes second
only to the capsizing of MV Bukoba in 1996.

Bukoba Urban Mayor Adronikus Karuma yesterday called for an urgent Municipal Full Council
meeting to deliberate on the matter and see how they could help the affected residents. According
to the RC, a total of 840 buildings were destroyed while 1,264 others suffered various degrees of
damage, including 44 belonging to the government.
By midday yesterday, around 83 people had been discharged from the Bukoba Referral Hospital
while more than 100 remained in at the facility for further treatment.

CCM ideology and publicity secretary for Kagera Region Hamimu Mahmoud told journalists that
the ruling party in collaboration with the Red Cross Society was set to launch a blood donation
exercise soon after the departure from of the Premier from the Kaitaba grounds.
Bukoba residents who lost their loved ones were struggling to come to terms with the consequence
of the disaster.

Mr Edson Simon, 27, a resident of Kashenye Street, lost his pregnant wife, Verdina.
“I left home early in the morning to withdraw some money from the bank in order to take her to
the hospital but at the end, I used the money to take her to the mortuary,” he said, adding:
“The earthquake has not only took away my beloved wife; it had also robbed me of the joy of
holding my first ever child.” The US Geological Survey, a global body monitoring such activities,
said the epicentre of the tremor was in Nsunga, an area near Lake Victoria located at coordinates
1.029S, 31.568E.

It further noted that the depth of the tremor was recorded as 10km and happened at 12.27am,
29km north east of Kyaka, 41km north of Katoro, and 43km North West of Bukoba town. Its effect
was felt across the Lake Zone regions of Mwanza, Musoma, Shinyanga and Musoma as well as
Kakamega in Western Kenya.