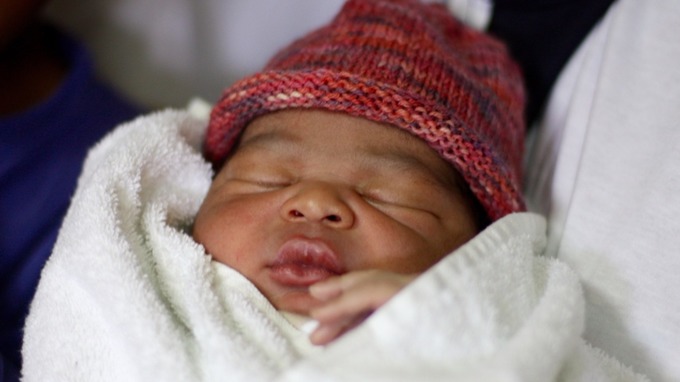 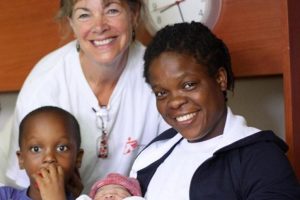 A Nigerian woman has given birth to a boy on board a rescue ship in the Mediterranean after being plucked from an overcrowded rubber dinghy.

Medical charity MSF said because the baby was born in international waters, his nationality was still under debate.

A midwife on board the ship MV Aquarius described the birth as “normal… in dangerously abnormal conditions”.

Thousands of refugees and migrants risk the dangerous crossing from Libya to Europe in search of a better life.

Last year, more than 3,700 people are believed to have died attempting the journey.

MSF said that the baby’s parents, Otas and Faith Oqunbor, had named him Newman Otas. They had been making the perilous crossing with their two other children, aged seven and five, and were rescued just 24 hours before the baby was born.

MSF communications officer Alva White reported the baby’s birth in a series of tweets on Monday from the Aquarius – a search and rescue vessel run by the group SOS Mediterranee in partnership with MSF.

“Just over an hour ago a baby boy was born on board the Aquarius. Mum, bub, dad and 2 big brothers are all well,” she said.

“The gorgeous little guy was born in international waters so his nationality is still under discussion.”

Ms White told the BBC that such events were rare on rescue ships, although another baby was born on the Aquarius in May to a woman from Cameroon.

She said that the 392 people now on board the Aquarius included seven pregnant women.

Mrs Oqunbor said she had been “very stressed” on the rubber boat and had been having contractions for three days. 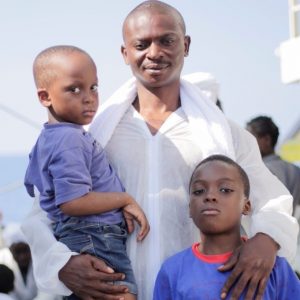 Father Otis with his other sons Victory and Rollres

MSF midwife Jonquil Nicholl, who delivered the baby, said: “I am filled with horror at the thought of what would have happened if this baby had arrived 24 hours earlier – in that non-seaworthy rubber boat, with fuel on the bottom where the women sit, crammed in with no space to move, at the mercy of the sea.

“And 48 hours previously they were waiting on a beach in Libya not knowing what was ahead of them.”