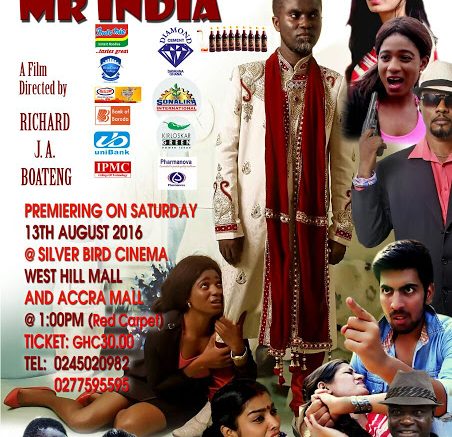 'Mr India' set to premiere at the Silverbird cinema

History is set to be made in the Ghanaian movie industry as the Silverbird Cinemas in Accra will for the first time premiere Ghana-Bollywood Movie ever produced from the Holy World Entertainment Centre.

“MR INDIA” is the first Bollywood-Ghallywood or Ghana-India collaboration film ever produced in Chandigarh – India, and Accra – Ghana. This movie is Drama and Action.

Great actors and actresses from India and Ghana were cast in this movie. In this movie ‘’MR INDIA ‘’you will see the Ghanaians speaking Hindi, the Indian local language.

The Movie directed by Mr. Richard J.A Boateng tells the story of two love birds, (Baaba and James) Baaba is in love with her childhood friend, James, but she can’t tell him. James travels to India and met Sonia, an Indian. They fall in love. James came back to Ghana to tell his family that he wants to marry Sonia. Baaba hears it and would do anything possible to stop the marriage. Will James fall for Baaba or he will go ahead and marry Sonia?

The movie which is set to be premiere on Saturday, August 13, 2016 at the Silverbird Cinemas in Accra and West Hill Mall will give Ghanaian movie producer’s hope for the future.

“Mr. India” will be showing at the Silverbird Cinemas throughout the whole of August 2016