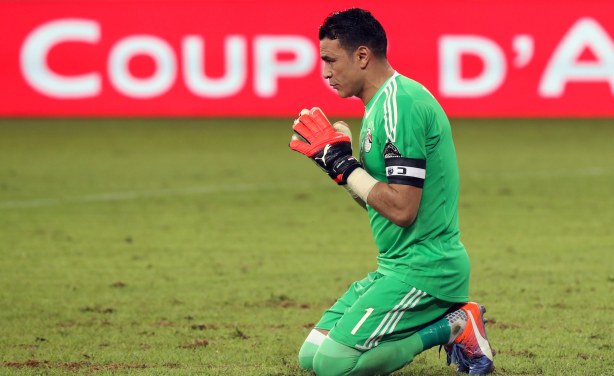 
Egypt coach Hector Cuper is battling a goalkeeper crisis ahead of his side’s crucial Group D clash against Uganda at the 2017 African Nations Cup finals in Gabon on Saturday (19h00 GMT).

Sherif Ekramy was injured before their pool opener against Mali, a dour 0-0 draw, while Ahmed El Shenawy had to leave the field in that game after taking a knock.

That left 44-year-old Essam El Hadary as the only option left for Cuper, and he will be wrapping him up in cotton wool ahead of Saturday’s clash, hoping that the oldest player in Nations Cup history does not pull up injured as well.

“I have a crisis after El-Shennawy was injured during the match. This leaves me with two injured goalkeepers and only one ready to start,” Cuper confirmed.

Ekramy is looking as though he will win his race against time to be fit for the game though.

He will also be hoping for more potency from his frontline that looked blunt against the Maliens, but could find more joy against the less skilled Ugandans.

“We have no option but to win our match against Uganda. Even if Ghana defeat Mali, the group will still be complicated till the last round,” Cuper said.

Arsenal midfielder Mohamed Elneny looked particularly below his best and has come in for heavy criticism from the Egyptian media in the last few days.


He will certainly have a point to prove having been billed as one of the potential stars of this tournament.

Uganda looked better in the second half of their 1-0 loss to Ghana and coach Milutin Sredojevic has a significant boost after the return of key duo, midfielder Khalid Aucho and central defender Murushid Juuko, from suspension.

The Serbian coach relies heavily on the skill and experience of the pair, who were sorely missed against the Black Stars.

Egypt have won each of their last 10 matches against Uganda dating back to 1995.

In fact, you need to go back 50 years for the one and only time that Uganda claimed a victory over The Pharaohs, an African Nations Cup qualifier in June 1967.

Another defeat for Uganda will see them exit the competition, while a draw would leave them needing to beat Mali in their final game to stand any chance of making the quarterfinals.