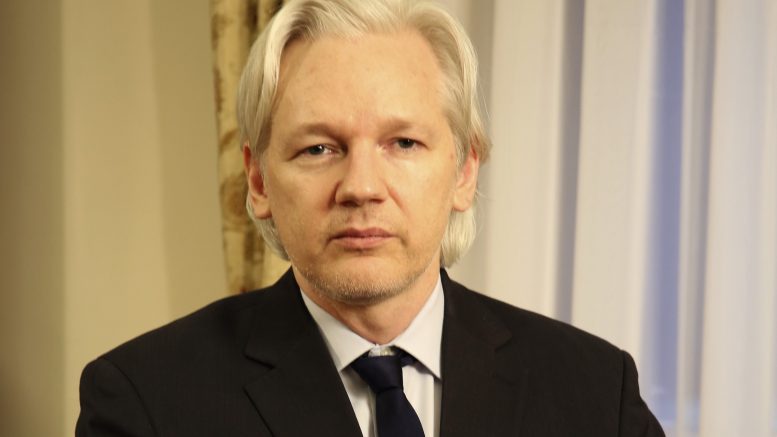 Former US vice-presidential candidate Sarah Palin once calls for Mr. Julian Assange to be “pursued with the same urgency we pursue al-Qaeda and Taliban leaders”.

Last year, I discovered that I had been an unwilling victim of password and email theft from a former acquaintance. The details were quite extensive, but it includes monitoring of my email and text conversations with friends and family members.

Furthermore, many of my friends received email and text messages from my accounts, terminating our friendship. Most people who received such messages were not only shocked, but did not call me to confirm the validity of such fake email and text messages. These activities went on for more than a year, before I became aware of it. In many cases, innocent email exchanges with friends were edited, printed and deliberately misrepresented to people, in exchange for unjustified sympathy in a deliberate smear campaign.

How do you respond to such matter? In my case, the flawed relationship was terminated.

This personal experience shows the negative impact of email and text messages in our society today and how most people are likely to believe any information at face value, absent of any supporting evidence. Regardless of the fact, most people have the tendencies to believe the first version of any stories.

Perhaps if you have been through such experience, you may relate to just how Hillary Clinton may be feeling, in regards to all the emails being released on a daily basis by Wikileaks. Most people would agree that anyone, seeking to breach your privacy and gain access to your email, is not doing so for good reasons. As the outcome of such nefarious and evil act will not favor you nor reflect the facts.

It has been said that “Silence is the best answer for a fool”.

This is why Hillary Clinton should ignore Wikilieaks and not waste any time on addressing the purported emails for now, but remain focused on providing her plans to the electorates.

How and why should you trust any information obtained and released by a nefarious organization? Many American intelligence agencies believe Wikileaks is working in close collaboration with the Russian government to directly attack the candidacy of Hillary Clinton, in favor of Donald Trump and undermine the electoral process.

Both Putin and Donald Trump have openly expressed their mutual admiration in various interviews. Here are some of the posting by Donald Trump on his twitter page:

Do you think Putin will be going to The Miss Universe Pageant in November in Moscow – if so, will he become my new best friend?

Putin has become a big hero in Russia with an all time high popularity. Obama, on the other hand, has fallen to his lowest ever numbers. SAD

While Trump argues that Hillary Clinton is too weak to be president of the United States, it is widely believed that the Russian President appears to be genuinely afraid of Hillary Clinton.

Evidence is growing that Russia is actively working to undermine Clinton’s presidential prospects. For example, when hackers released the emails of the Democratic National Committee just hours before the Democratic National Convention, internet security specialists found the fingerprints of Russian agencies. Then came the latest hacks of Clinton campaign chairman John Podesta.

Absent of any clear policy for his presidential bid, Donald Trump and his team frequently referenced Wikilieaks emails in their efforts to malign Hillary Clinton.

We’ve all wondered how Hillary avoided prosecution for her email scheme. Wikileaks may have found the answer. Obama! https://t.co/xF0wv8Oa8q

The US government has now formally accused Russia of interfering in the US elections, and every instance of interference so far is clearly aimed at harming the Democratic candidate.
It’s easy to see why Putin fears Clinton. While the Trump campaign is trying to get voters to focus on Clinton stumbling and coughing, Putin sees her as a real threat to his objectives.
For Putin, stopping Clinton is not only an important strategic goal. It is also personal. 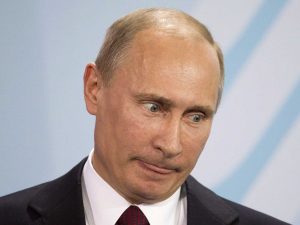 Back in 2011, Putin faced the biggest protests the country had seen since the collapse of the Soviet Union. He had served two terms as president, the maximum allowed, and in 2008 had become prime minister, in a maneuver that allowed him to effectively hold power while his ally, Dmitry Medvedev, was president. Then he announced — to much anger, but little surprise — that he would seek a third term as president. Three months later, the opposition erupted in fury when his party won a landslide victory in legislative elections amid allegations of fraud.
Despite the frigid Moscow temperatures, thousands massed in the streets calling for fair elections and for an end to Putin’s seemingly endless rule. Signs and chants declared, “Putin is a thief!” Putin’s hold on power faced a genuine threat. Then-Secretary of State Clinton openly sided with the protesters. “The Russian people, like people everywhere,” she said, “…deserve free, fair, transparent elections.”
Putin was fuming. He blamed the protests on Clinton, accusing her of sending “a signal” to the opposition.
Putin’s personal animosity toward Clinton coincides with his larger strategic goals. In recent years, he has launched an increasingly muscular foreign (and domestic) policy. He is challenging the US, NATO and the European Union at every turn. Despite a shrinking economy — not much bigger than Mexico’s — Russia has used its military power to make it a major player on the global stage.

What you may or not already know about Wikileaks;

The “whistle-blowing” website Wikileaks has dominated the news, both because of its steady drip feed of secret documents, but also because of the dealings of its enigmatic front man Julian Assange.

Julian Paul Assange, born on July 3, 1971 is an Australian computer programmer, publisher and journalist. He is self-proclaimed editor-in-chief of the organization WikiLeaks, which he founded in 2006.

The recent release of thousands of sensitive email discussions within Hillary Clinton and the Democratic Party are just the latest in a long list of “leaks” published by the secretive site, which has established a reputation for publishing sensitive material from governments and other high-profile organizations.

The existence of Wikileaks is viewed by some as the future of investigative journalism, while some, particularly the governments and corporations whose secrets it exposes, as a risk.

Wikileaks, publishes confidential documents and images, in 2006 – making headlines around the world in April 2010 when it released footage showing US soldiers shooting dead 18 civilians from a helicopter in Iraq.

Wikileaks efforts to interfere with elections in various countries are well documented.

During the 2008 US elections, it published screenshots of the email inbox, pictures and address book of then vice-presidential candidate Sarah Palin.

In October 2009, it posted a list of names and addresses of people it claimed belong to the British National Party (BNP). The BNP said the list was a “malicious forgery”

Other controversial documents released include a copy of the Standard Operating Procedures for Camp delta, a document that detailed restrictions placed on prisoners at Guantanamo Bay.

Many of its documents are uploaded to the website, which allows anyone to submit documents anonymously.

Here are some of the highlights of their document release over the past ten years;

Its leader, Assange once said in an interview “We use advanced cryptographic techniques and legal techniques to protect sources.”

“We specialized in allowing whistle-blowers and journalist who have been censored to get material out to the public,” said Julian Assange.

The site has faced numerous challenges and the private life of Julian Assange has been laid bare and it has lost key staff and supporters.

It continues to face numerous cyber attacks and various firms, including web giant Amazon have terminated agreements to host the site and provide services to it.

In addition, companies – including MasterCard, Visa and PayPal have withdrawn the ability for people to donate to the site. Its Swiss bank account has also been closed.

This is not the first time the site has faced financial problems. In February 2010, it suspended operations as it could not afford its own running costs. Donations from individuals and organizations saved the site.

Critics say there is no way to ascertain the accuracy of documents released by Wikileaks and that its agenda has been politically motivated.

To his supporters, Julian Assange is a valiant campaigner for truth. To his critics, he is a publicity-seeker who has endangered lives by putting a mass of sensitive information into the public domain.

To those who have worked with him, he has been described as intense, driven and highly intelligent, with an exceptional ability to crack computer codes.

In late 2010, he was detained in the UK after Sweden issued an international arrest warrant over allegations of sexual assault.

Swedish authorities said they wanted to question him over claims that he raped one woman and sexually molested and coerced another in August of that year, while on a visit to Stockholm to give a lecture. He says both encounters were entirely consensual.

He spent the following months fighting extradition while under house arrest in a small rural town in England. Westminster Magistrates’ Court approved the extradition in February 2011 and this was later upheld by the High Court.

On 14 June 2012, the UK Supreme Court dismissed his application to re-open the appeal.

Few  days later, Mr.  Assange sought refuge in the Ecuadorean embassy in London, where he remains after being granted political asylum by the South American country on August 16, 2012.

He fears being extradited from Sweden to the US and put on trial for releasing secret US documents.

The UK government has said it will not allow him safe passage out of the country to fly to Ecuador as it is legally obliged to extradite him to Sweden. The Swedish foreign ministry insisted the sole reason they want Mr. Assange extradited is so the allegations against him can be properly investigated.

Sweden’s prosecutors dropped their investigation into the sexual assault allegations on 13 August 2015 after running out of time to question and bring charges against him. But Mr.  Assange still faces the more serious accusation of rape.

In 2014, Mr.  Assange complained to the UN that he was being unlawfully detained as he could not leave the embassy without being arrested.

In February 2016, the UN panel ruled in his favor, stating that he had been “arbitrarily detained”, and should be allowed to walk free and compensated for his “deprivation of liberty”.

The ruling is not legally binding on the UK, however, and the UK Foreign Office responded by saying it “changes nothing”. The Metropolitan Police have said he will still be arrested if he leaves the embassy where, for now, he remains.

In summary, if Julian Assange truly believes that his organizations objectives are justifiable and should continue in his efforts to interfere in democratic process, he should come out of his hiding and face numerous charges against him. Until then, he is merely a coward being used by Russia as a political tool.