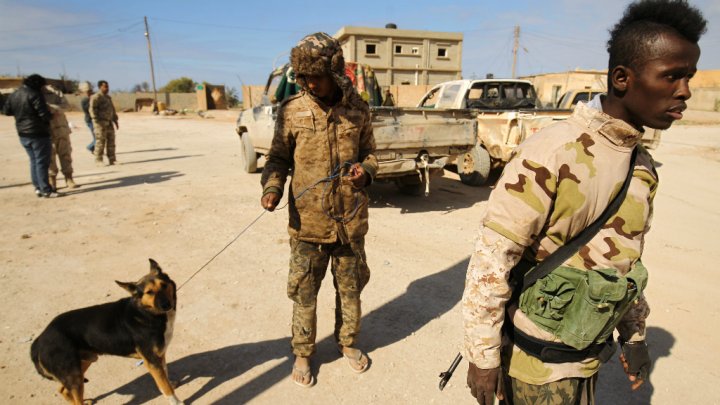 Members of the Libyan National Army (LNA), also known as the forces loyal to Marshal Khalifa Haftar, patrol on January 28, 2017 the area of Qanfudah, on the outskirts of Benghazi, after retaking it from IS fighters ( Abdullah DOMA / AFP)

TRIPOLI. (Reuters) – Libyan authorities have arrested a suspected al Qaeda leader who fled from the eastern city of Derna, once a jihadist bastion, a source in the attorney general’s office said on Friday.

Abdel Qader Azuz was arrested in the western city of Misrata and then brought to the capital Tripoli the source said. No other details were immediately available.

Azuz was one of the senior militants in Derna, according to Libyan officials. The city has been long a hotspot for Islamist militants. Many had fled Libya to escape persecution by Muammar Gaddafi and to fight in Afghanistan, then returned home after the dictator was toppled in 2011.

Eastern military forces allied to Khalifa Haftar, which control eastern Libya, have seized much of Derna in a military campaign that officials say is almost over.

Al Qaeda and Islamic State have been using Libya as a base for attacks exploiting the security vacuum and chaos created by the fall of Gaddafi.
Reuters
Reporting by Ahmed Elumami, Ayman Salhi and Ulf Laessing; editing by Larry King