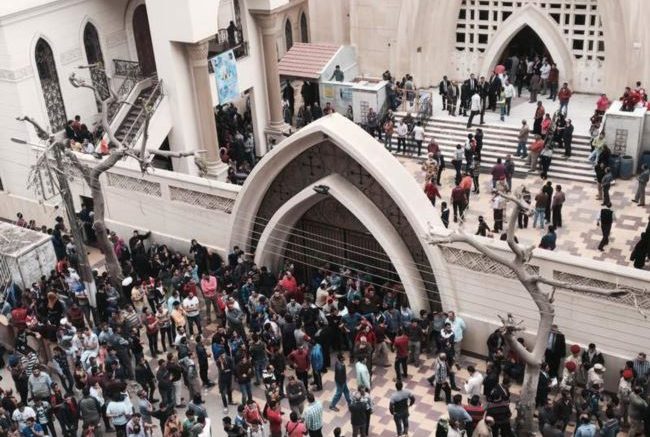 Relatives and onlookers gather outside a church after a bomb attack in the Nile Delta town of Tanta, Egypt, Sunday, April 9, 2017.

CAIRO (Reuters) – An Egyptian military court sentenced 17 people to death on Thursday for their involvement in bombing attacks on three churches and a police checkpoint in 2016 and 2017 that killed more than 80 people, the state news agency MENA reported.

Nineteen others were handed life prison terms for the attacks, which hit churches in Cairo, the Mediterranean city of Alexandria and the Nile Delta city of Tanta, MENA said.

The sentences are subject to appeal. Reuters was not immediately able to determine whether the accused had entered pleas, or to reach their lawyers.

Egypt’s Coptic Christian minority, which makes up an estimated 10 percent of the population, has been a frequent target of attacks and persecution since the uprising that toppled former president Hosni Mubarak in 2011.

Islamic State militants claimed responsibility for the Alexandria and Tanta bombings, both of which were suicide attacks on Palm Sunday in April 2017 and left a total of 45 people dead.

The group also claimed responsibility for a December 2016 attack on a chapel adjoining St Mark’s, Cairo’s main cathedral, that left 28 dead. The cathedral is the seat of Coptic Pope Tawadros II and its security is normally tight.

MENA said that some of the defendants were also suspected of carrying out an attack on a checkpoint in Egypt’s Western Desert that killed at least eight policemen last year.

A total of 46 people are on trial in the case, including 15 who are being tried in absentia. The remaining 10 accused were jailed for between 10 and 15 years, MENA said.

Following the Palm Sunday attacks in Alexandria and Tanta, President Abdel Fattah al-Sisi declared a three-month nationwide state of emergency. It has been extended and remains in force.

Since February, Egypt’s military has been conducting a major operation against Islamist militants in the Sinai Peninsula, where Christians have also been targeted.

Authorities say a crackdown on dissent and freedoms is directed at terrorists and saboteurs trying to undermine the state. Death sentences have been handed down to hundreds of Sisi’s political opponents, including 75 sentenced to death last month over a 2013 sit-in which ended with security forces killing hundreds of protesters.

Amnesty International said in a statement that the cases should be retried in a civilian court in proceedings that complied with international human rights law and fair trial standards.

(Corrects case’s total number of defendants from 36 to 46 in paragraph 8.)