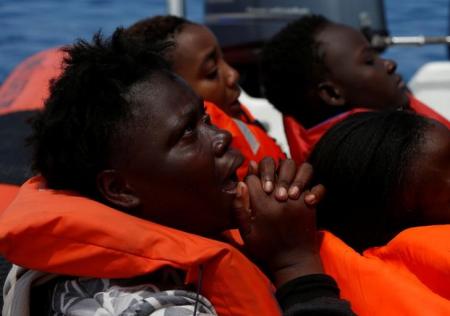 A migrant reacts after being rescued by the Malta-based NGO Migrant Offshore Aid Station (MOAS) ship Phoenix during a rescue operation in the central Mediterranean in international waters, off the Libyan coastal town of Sabratha, May 4, 2017. REUTERS/Darrin Zammit Lupi


TRIPOLI/ROME (Reuters) – More than 200 migrants are feared to have died in the Mediterranean over the weekend, according to testimony from survivors, and several bodies, including that of an infant, have washed up on a Libyan beach.

About 7,500 people have been rescued off the coast of Libya since Thursday, the Italian and Libyan coastguards said. Two groups of survivors told the organizations that hundreds drowned when their rubber boats began to deflate before rescuers arrived.

More than 60 are feared dead and three bodies were recovered on Saturday, survivors brought to Sicily on Sunday told Italian coastguards. The boat left Libya carrying about 120, they said.

There was some discrepancy in the numbers. Based on its interviews with some of the survivors in Pozzallo, Italy, the U.N. refugee agency estimated the number of dead at more than 80.

Separately, Libya’s coastguard picked up seven survivors over the weekend who said they had been on a boat packed with 170 migrants. Aid agency International Medical Corps, which gave medical care to the survivors, also confirmed their account.

“We rescued on Sunday seven illegal migrants – six men and a woman,” said Omar Koko, a coastguard commander in the western city of Zawiya. “According to these survivors, there were 170 on board the boat, which sank because of overloading.”

Among those missing were more than 30 women and nine children, Koko said.


Eleven bodies washed up on the shore west of Zawiya, said Mohanad Krima, a spokesman for the Red Crescent in Zawiya.

“All the bodies are of female victims and there is a girl of less than one year old,” he said. Last week, survivors said a young man found shot dead on one of the rubber boats had been killed by a smuggler for his baseball cap.

The U.N. refugee agency says that, excluding the latest shipwrecks, more than 1,150 people have disappeared or died so far this year trying to reach Italy from North Africa, where a breakdown of law and order has allowed people smugglers to operate with impunity.

“The increasing numbers of passengers on board vessels used by traffickers, with an average of 100 to 150 people, are alarming and the main cause of shipwrecks,” United Nations High Commissioner for Refugees Filippo Grandi said on Sunday.

“Risks are increased by the worsening quality of vessels and the increasing use of rubber boats instead of wooden ones,” Grandi said.

(Reporting by Isla Binnie and Steve Scherer in Rome, and Ahmed Elumami in Tripoli; Editing by Alison Williams)