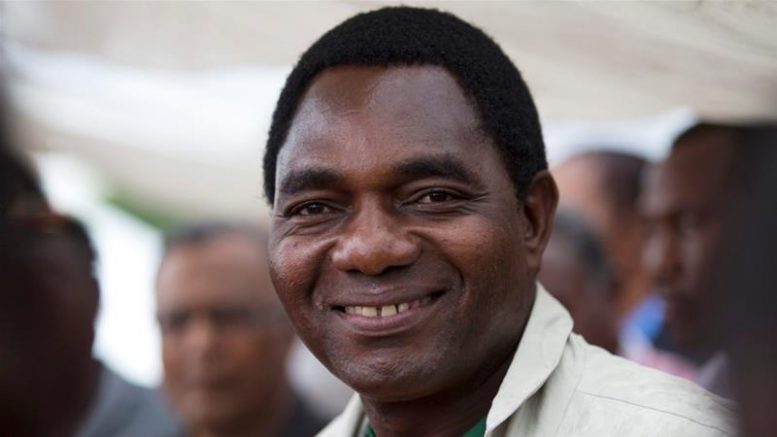 Hichilema was arrested during a police raid on his house [File: Rogan Ward/Reuters]

Zambian opposition leader Hakainde Hichilema has been charged with treason for allegedly obstructing President Edgar Lungu’s motorcade on the main road, according to police.

On Saturday, Lungu had passed through Mongu – 500km west of the capital, Lusaka – and his motorcade was obstructed because Hichilema’s convoy refused to give way, police said.

“The opposition leader disobeyed police orders to give way to the presidential motorcade in an attempt to put the life of the republican president in danger,” police chief Kakoma Kanganja told reporters in Lusaka on Wednesday.

Hichilema, who was arrested during a police raid on his house late on Monday, and five UPND aides were charged with treason breaking the highway code and use of insulting language.

Treason is a non-bailable offense in Zambia, with a minimum jail term of 15 years and a maximum sentence of the death penalty.

Hichilema’s lawyer Jack Mwiimbu said he was waiting for his client to appear in court.

“After that, we are going to take appropriate action in the interest of our client,” Mwiimbu told the Reuters news agency.

“He is still detained in police cells at Lilayi but he is in high spirits. He has always known that the PF have always wanted to charge him with a non-bailable offense, so he is not shocked,” he said

The UPND has dismissed the charges and criticized the raid on Hichilema’s home as “barbaric” after the politician’s wife and children were trapped and choked by gas.

The charges were strongly condemned by the Non-Governmental Organisation Coordinating Council, an umbrella body of Zambian action groups

“Arresting opposition leaders on trumped-up charges is a recipe to heighten tension in an already volatile economic and political environment,” its chairwoman Sara Longwe said.

Zambia’s Human Rights Commission, established under the constitution to investigate human rights violations, said in a statement, that it hoped Hichilema would be treated fairly and brought before the courts of law without unreasonable delay.

Kanganja, the police chief, said the police were acting independently and not under political pressure.

“I wish to reiterate that the actions by the opposition leader were unreasonable, reckless and criminal. Therefore members of the public are being warned that as police we are not going to watch such kind of behavior by any person, irrespective of their status,” he said.

Last October Hichilema and UPND vice-president Geoffrey Mwamba were arrested for unlawful assembly and sedition when they tried to visit supporters in jail.

His team called the arrest an attempt by the ruling party to silence dissent.