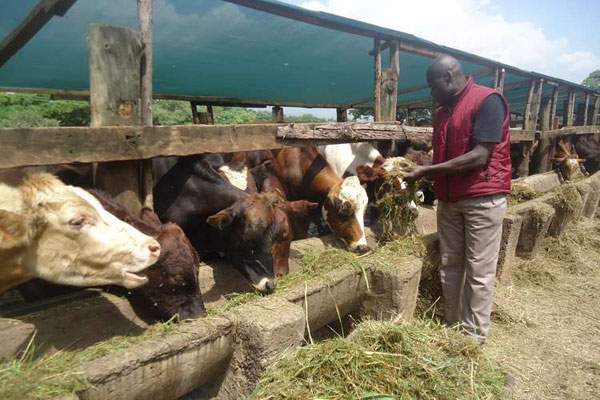 Moving among rows of maize plants, he pulls weeds and reaches for the maize heads, squeezing them to see if they are mature enough to harvest.

But Gitonga’s crop, which covers one-third of his land, is not destined for human consumption it’s purely to provide fodder for livestock.

Gitonga is one among a growing number farmers in Meru County who are cultivating maize to produce silage — maize stalks and immature ears that are chopped up and then compressed for at least three weeks in an airless container to ferment without rotting.

Silage is considered more nutritious for livestock than other kinds of plant fodder.

Chopping down a maize crop before it is ripe might sound unwise. But farmers say it makes perfect sense, particularly as worsening drought in Kenya makes it harder to get a normal maize crop to harvest.

“I embarked on farming fodder for my animals after I realized that the returns were tremendous, with the milk production of my dairy cattle doubling from a mere 30 litres a day to 68 litres,” said George Muthamia, who lives in Nkubu, also in Meru County.

Since 2012, Muthamia has devoted 4 acres of his 6-acre farm, where previously he grew crops such cabbages, tomatoes and potatoes, to fodder.

He learned about silage-making from SNV, a Dutch non-governmental organization that helps farmers increase their income and their employment opportunities.

Phillip Oketch, an agricultural consultant, reckons that 30-40 percent of farmers in Meru County now produce silage as a regular part of their crop production, and the proportion is growing. Experts say there are similar trends in other parts of the country.

Saverino Kinge Manene, the county’s chief officer for agriculture, livestock and fisheries, said the benefits of turning maize crops to silage are clear in Meru, where an estimated 70 percent of farmers have dairy cattle.

Cows fed silage produce at least 50 percent more milk than those fed on ordinary dry fodder such as maize leaves and stalks or Napier grass, he said.

Meru’s farmers have grouped together to sell their growing milk production to cooperatives, and a larger grouping, the Meru Dairy Union, now processes and sells the milk.

Even though increased production overall has led to lower prices, farmers say their individual incomes have risen because they have so much more milk to sell.

But while farmers welcome the gains in income, some experts warn that there are risks to food security if too many growers stop using land to grow crops that people can eat.

“The size of farmland is not expanding, yet the size of human population is increasing by the day, and if more land is to be converted to farming fodder food, the effect on food security will be magnified,” said David Mugambi, a lecturer in natural resources management at Kenya’s Chuka University.

Mugambi said that most people who have turned to silage-making are larger-scale farmers, which means that bigger areas of land “as much as 10 acres (4 hectares) per farmer” are being diverted from producing crops for people.

He pointed out that feeding silage to cows does not guarantee an increase in milk production, because other factors such as the animal’s general health and its environment also influence the amount of milk produced.

Food on hand a better bet

He said he believes it is better for farmers to have food on hand than money in their wallets, particularly in an environment like Kenya’s, where more frequent droughts linked to climate change are affecting food production, leading to food shortages and rising prices.

These problems are exacerbated when land is diverted from cultivating crops to growing fodder, Mugambi said.

Instead, he advises farmers to use land that does not support the production of food crops for growing silage, or to instead grow maize for human consumption and keep the stalks and leaves for fodder.

That approach is more sustainable and will help ensure food security at the local and national level, he said.