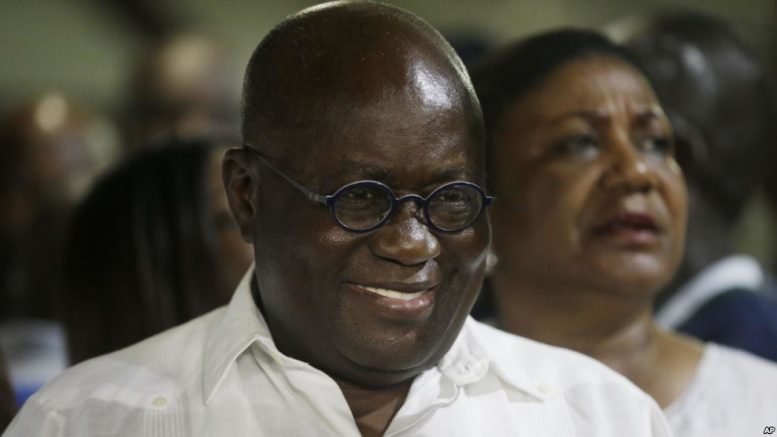 Ghana President elect Nana Akufo-Addo, of the New Patriotic Party, smiles on being declared the winner of the presidential election in Accra, Ghana, Dec. 9, 2016.

The chairman of Ghana’s opposition People’s National Convention (PNC) says it is regrettable that civil society groups are pressuring President-elect Nana Addo Dankwa Akufo-Addo to form an all-inclusive government by choosing ministers from rival parties as part of his incoming administration.

PNC chairman Bernard Mornah says Ghanaians appeared to have confidence in Akufo-Addo’s economic policies and promises he made during campaigns in the run-up to the elections.

“The so-called civil society are pushing NPP and Nana Akufo-Addo too far, because when we were doing the campaign they were not asking for all-inclusive political policy projects. They allowed us to campaign on our individual programs and it is on the individual campaign programs that they won the election. So, I would wish and hope that the NPP would be allowed the free will to govern.”

Supporters of the NPP who own businesses, including those who deal in spare car parts, have announced sharp price decreases in solidarity with Akufo-Addo’s victory. This is the second time the business owners have reduced their prices following an NPP victory. They did so after former president John Agyekum Kufuor also won the presidential vote for the first time.

But, Mornah is displeased with the gesture, saying it is unpatriotic.

“Prior to election 2016, the same business community …particularly the informal sector …lamented and complained about the unfavorable business environment that they operate in. So it is strange that just because elections have taken place, the same businessmen and women who were complaining that things were difficult can suddenly find that their businesses are booming and that they can reduce prices in response to the change in government. What I can infer is that these businessmen and their groups stand only for one political party and they don’t stand for the best interest of our nation,” said Mornah.

“I am sad by this development, but I would say that the NPP must be careful about these kinds of businessmen because if it is their strategy to reduce prices but would find ways to make sure that they [bring] in the money, will that lead the NPP to for instance not taxing them or asking them to pay appropriate taxes appropriately? If that is what the NPP is going to do, then I think the business community is going to shortchange our nation.”

Meanwhile, Ghanaian opposition political parties that trace their lineage to founding president Osagyefor Dr. Kwame Nkrumah, plan to begin discussions to form an alliance to compete as a united front in future elections, according to Mornah, who’s PNC is a Nkumahist party.

The parties include the Convention People’s Party (CPP) – the political party that Nkrumah led the country to independence in 1957, PNC, the People’s Progressives Party (CPP) and the PNC.

The Nkumahist parties failed to significantly pose a challenge to the two main parties: the NPP and the NDC. Analysts say Ghana is becoming a two-party state with so-called fringe or minor parties that have little representation in parliament.