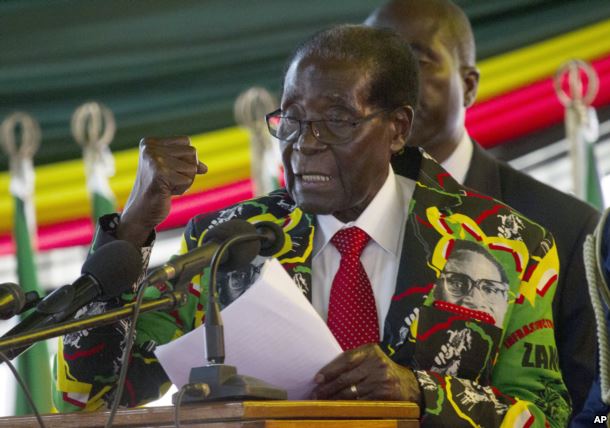 Zimbabwe President Robert Mugabe delivers his speech at the opening session of his party's 16th Annual Peoples Conference in Masvingo, about 300 kilometres, south of the capital Harare, Friday Dec. 16, 2016.

Mugabe accused the factions of using social media to attack each other, saying “we must not settle our issues through Facebook and Twitter.”

“There is a new culture of indiscipline in the party by some of the members who are here,” Mugabe said. “They do what they want. There is even contempt and arrogance…tumwe twacho hanzi VaMugabe hatichivade, zvino zvausasavade wati zvoitwa seiko iwe pachezvako.”

In the Shona language, he says there are some who say they no longer like Mugabe. He asks them: What do you want done?

It is almost taboo in ZANU-PF to discuss who will replace Mugabe, who has been at the helm of Zimbabwe since it won independence from Great Britain in 1980.

But with Zimbabwe’s collapsed economy showing no signs of life, and with the president set to turn 93 in February, such talk has begun – even though the president is choosing not to hear.