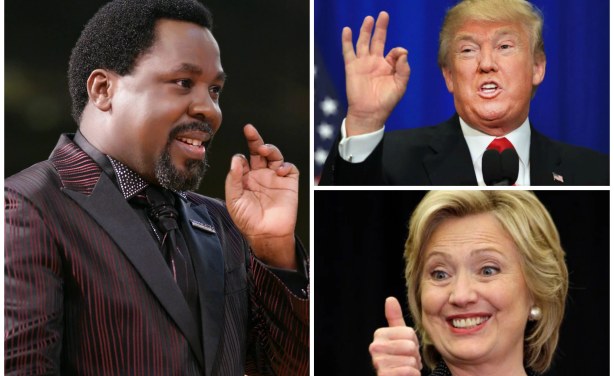 TB Joshua had said that Hillary Clinton will win the U.S. election.

Most of us were relying on the prophetic word of Nigerian pastor TB Joshua so we could see a woman lead the great America. Unfortunately, we were all wrong, fooled or misled. Were TB Joshua’s words reported “out of context”.

You may recall that the founder of the Synagogue Church of All Nations, Prophet TB Joshua, had prophesied that he saw a woman winning the election. Though he did not mention any particular name, he said he saw a woman as the winner of the election. The controversial preacher had said that the Democratic candidate (which was Hillary Clinton) would secure a “narrow” victory. However, businessman mogul Donald Trump has won the U.S. presidential election, and not by a ‘narrow’ gap. Trump won 288 electoral votes – 73 more than Hillary Clinton, who garnered 215 electoral votes.

With the outcome of the result, TB Joshua’s message has sparked widespread debate, leaving many people confused on whether the prophet is fake or a true Prophet.

In fact, people have already started criticizing him on social media, calling him a prophet of doom and a fake prophet.

This is not the first time that TB Joshua’s prophecy has gone wrong. The prophet has came under fire after he failed to predict that his church building would collapse on September 12, 2014, resulting in the deaths of 116 people.

TB Joshua remains one of the most popular clerics in Africa, rated 13th most famous prophet worldwide, with over two million fans on Facebook and almost 450,000 YouTube subscribers.

Anyway, we are all impatiently waiting to hear the prophet’s explanation on this turn-around event!

By Melody Chironda I Blog