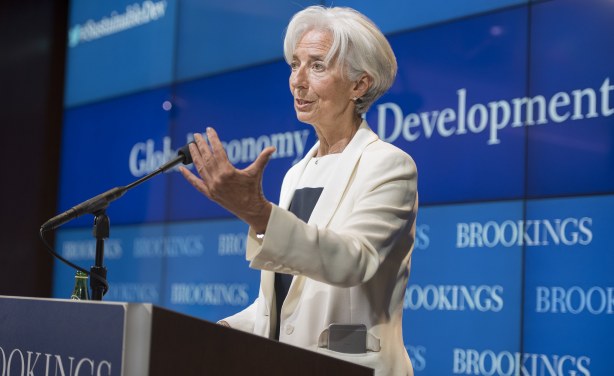 She said “That is really important for low-income countries to be able to actually absorb the shocks without necessarily going to the international markets or relying on bilateral lending capacity of close to a trillion dollars by extending access to bilateral borrowing agreements. The new agreements that are being signed this week will run at least through the end of 2019, and will continue to serve as a third line of defense.

“As you know the first line of defense is quota, second line is new arrangements to borrow, and the third line of defense will be those bilateral loans. We have so far received pledges of $344 billion from 26 members. We look forward to others joining this effort. We will provide more detail shortly, and there will be some signing sessions organized in the course of the next two days Lagarde said.

This ordinarily would be cheering news for Nigeria but the facility is bugged with conditionality that top government sources say Nigeria will not be willing to subject its citizens to at this time.

Lagarde at a press briefing yesterday said “the outlook for advanced economies remains subdued and the outlook for developing economies provide some guarded optimism with great diversities within the various economies. Prospects for low income economies may be more challenging with varied outlook. We see growth as too low, too long and benefiting few.

“We believe that there are more policies that meet the eyes. By exploiting synergies in policies we can overcome these challenges. We also believe that each country has something to offer. My hope us that at the end of these meetings, each finance minister, each Governor of central bank will go back home thinking of what to fuel growth.

For example, when monetary policy has been over stretched, fiscal policy can step up. “This will also put in place the structural reforms that are much needed, which have been sorted out in some countries, but which are still lacking in other places. So, what does it mean for the IMF?

It means that if we want to improve the inequality issue, we must have a strong international safety net. In this context, I am pleased to reveal that our board recently approved the extension of zero interest rate on all concessional facilities from 2016 to 2018, and thereafter, if there is need for extension.”

IMF had earlier said “we find ourselves in a low-growth, low-rate, era characterized by increased political and policy uncertainty. This is creating many challenges for banks, policymakers, and corporate, in all parts of the world. Failure to adapt to this new era could undermine the health of financial institutions and add to the pressures of financial and economic stagnation.

Risk factor:” Short-term risks have declined. Six months ago we worried about Brexit and possible global repercussions. The shock of Brexit was well absorbed by markets, helped by central bank contingency plans, and monetary policy easing by the Bank of England. The impact appears more local than global. We were worried about high levels of corporate debt in emerging markets and rising risk of default.

As some of the worst-hit emerging markets showed signs of recovery, and against the backdrop of further monetary easing, emerging market assets have rebounded strongly. The passing of these near term risks has led to a fall in volatility and a rise in equity prices in advanced economies.

“But medium term risks are building, because we’re entering a new era of challenges. Low, uneven, and unequal growth is opening the door to more populist and inward looking policies, leading to a loss of political cohesion and a rise in policy uncertainty in some countries. This could increase volatility and undermine growth.

“A striking outcome of this weak economic environment and heavy reliance on unconventional monetary policies is that markets expect negative policy rates in the euro area and Japan to last through the end of this decade hopes for normalizing monetary policies well into the future. As a result, almost 40 percent of advanced economy government bonds carry negative yields.”

This is unprecedented! Financial stability now depends on how well financial institutions adapt to this new era.

“Since the crisis, enhanced regulation and oversight have strengthened banks’ capital and liquidity positions, making them safer. However, this new era of low growth and low rates threatens to undermine these hard won gains.

Markets have serious concerns about the ability of many banks to remain viable and healthy. Equity valuations are well below the book values of many banks as the focus of investors has shifted from the level of capital to the business models that banks need to maintain that capital through profits. This is the fundamental reason why some banks have come under pressure this year.

“The question that we raise in this report is whether an economic recovery is sufficient to restore sustainable profitability. Or, are the problems more deep rooted and structural? To answer this question, we conducted a detailed bottom up analysis of some 280 banks, covering about 70 percent of U.S. and the EU banking systems. We found that a cyclical recovery helps, but is not enough. In this exercise, a large majority of U.S. banking system returns to healthy levels of profitability. But, some weaknesses remain.

“Despite signs of recovery and resilience in some economies, global growth continues to disappoint, with the expected pick-up driven primarily by emerging markets. This persistent underperformance has exposed complex underlying trends in many countries–including the difficulty for some groups to adjust to rapid changes in the global economy.

Policymakers should act and use a balanced mix of all policy levers to revive demand and raise productivity, and ensure the gains from technology and globalization–which have led to unprecedented global welfare gains in recent decades–are shared more broadly.

A retreat from globalization and multilateralism is a serious risk at a time when international cooperation and coordination are as critical as ever. The Fund can assist by helping policymakers in their efforts by providing advice, developing capacity, and lending to countries in need, while continuing to advocate for multilateral solutions that work for all”.