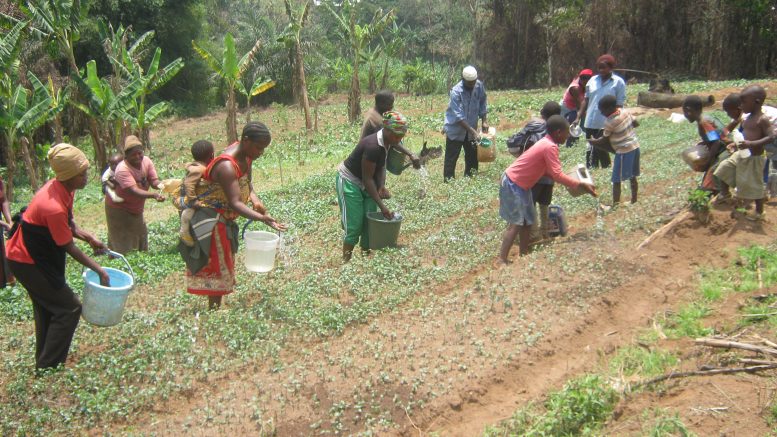 Akum — Farmers, many of them women, are now getting five crops a year, feeding markets as far away as Cameroon’s cities

Farmers in this poverty-mired region of northwest Cameroon used to watch their vegetable patches dry up and die in drought periods, even though nearby rivers and streams offered a steady flow of water.

The problem? Getting the water to the fields was nearly impossible because the area’s steep, rocky terrain made carrying it hugely difficult.

But now a channel irrigation system is allowing farmers to access water for their fields, helping them grow vegetables throughout the year and better manage worsening drought associated with climate change.

“We are really grateful to God for providing us the streams through which we are tapping water to grow our crops. Even in the absence of rain we are now sure of food on our tables and income to send our kids to school,” said Akwi Rachel, a member of the Akum Vegetable Farmers Group, one organisation benefiting from the irrigation scheme.

The system uses a network of farmer-built canals that rely on gravity to bring stream water to fields in Cameroon’s Akum and Santa districts.

The two districts sit in a semi-arid area of the country, but streams from the lush highlands flow through it, making irrigation a good option.

Before, “we could not grow our vegetables and other crops during the prolonged dry periods because of lack of water. We have been suffering even though we are blessed with nearby streams,” said Jude Awantung, a farmer in Santa.

But now “we now have good yields even in the prolonged dry periods”, she said.

Farmers built the canals starting in 2013 with financial help from Cameroon’s government, backed by a $25 million loan from the African Development Bank.

Some farmers also built small water storage tanks to capture water when plenty is available and save it for very dry periods.

The project is part of an effort to provide climate change adaptation assistance in drought-hit areas, said Benjamin Fobuzo, who is in charge of project execution for government rural development efforts in North West Cameroon.

The irrigation project has raised annual vegetable production in the two districts by about 37,000 tonnes since 2013, and boosted farmer income from an average of about $425 a year in 2013 to about $615 this year, according to Gregory Muluh Ngu, the head of government rural development programmes in the North West region.

“We are happy the irrigation programme is improving agricultural production and incomes,” Muluh said.

The building, monitoring and maintenance of the irrigation system – including channels, water catchments and small dams in a few areas – is carried out by farmers.

The systems serve around 139,000 farmers and 84,600 agricultural laborers, who use it to grow vegetables such as tomato, cucumber, lettuce and okra, Muluh said.

“Supporting irrigation has become crucial in drought-hit regions in the North West,” said Godfrey Nutoto, the regional head of the Ministry of Agriculture in North West Cameroon.

He said that replicating the project in other areas of the country that also suffer from drought could “significantly boost food production in the country”.

With access to irrigation, farmers in Akum and Santa – many of them women – can produce five vegetable harvests a year, including during the dry season, when demand and prices are highest, Nutoto said. Many of the vegetables end up in markets throughout the country, he said.

More than half of the 1.95 million people in Cameroon’s North West region live in poverty, and the region is home to 13 percent of the country’s rural poor, according to government statistics.

The irrigation project has helped cut shortages of vegetables, particularly during the dry season, and helped boost the planting success of farmers during that period from less than 10 percent to over 90 percent, Nutoto said.

Growing maize and a range of vegetables is now an all-year-round business for farmers in the area, which means improved incomes and better living conditions, he said.

On average, small-scale farmers in the irrigated area cultivate tiny plots of about 200 square metres.

The irrigation development programme aims not only to help farmers but boost supplies of food in Cameroon’s cities during the dry season.

“I now produce enough tomatoes for our local markets and to supply to bigger markets in Douala and Yaounde even in the dry season,” said Awangtung, a farmer in Santa.

Pressure on food resources in Cameroon is climbing, especially in the drought-stricken Northern and East regions.

More than 65,000 refugees from Nigeria and about 260,000 from the Central African Republic are now living in Cameroon’s resource-short East and Adamawa regions, the report said.

This year, about 61,000 children under 5 in Cameroon are expected to suffer from life-threatening malnutrition as a result of this ongoing crisis, the report said.