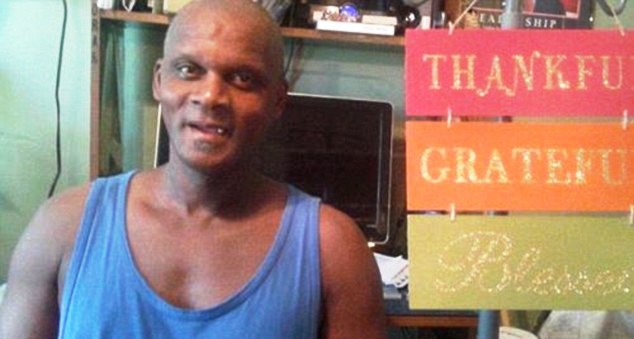 The family of Gregory Frazier, 55, initially called 911 after he threatened family members with a knife but was said to be quietly eating chicken when he was shot.

Gregory Frazier’s family said they wanted to know ‘why police felt the need to execute him as he ate his supper in the backyard of his house rather than use negotiation tactics.’

A black man who was shot dead by white police officers called to a domestic altercation at his Florida home was “executed” as he sat eating chicken wings in his backyard, relatives claimed on Monday.

Deputies from Broward sheriff’s office shot Gregory Frazier, 55, multiple times outside the house in Pompano Beach on Friday night after a 911 call from his sister, who said he was threatening her and her daughter with a knife and “breaking up the house” after a day of drinking.

In the call, Deborah Frazier warned the dispatcher that her brother was wielding a Swiss army-style pocket knife.

But Frazier’s relatives insist he had regained his composure by the time the two officers arrived and was sitting calmly in the backyard eating chicken and fries when they approached him.

Quartaze Woodard, Frazier’s nephew, told the Broward New Times that the officers opened fire after his uncle twice refused an order to lie on the ground.

Woodard said that the officers handcuffed Frazier after shooting him, then released the handcuffs and attempted to perform CPR once they realized he was unresponsive.

Deborah Frazier, meanwhile, told the New Times that she regretted calling 911. “I would never have called the cops if I’d known this would happen. They just came in and started shooting right away,” she said.

Scott Israel, the Broward County sheriff, announced on Monday that he had asked the Florida Department of Law Enforcement to investigate Frazier’s death, along with another deputy-involved shooting in Pompano Beach earlier in the day that saw a motorist and traffic officer taken to hospital.

In that incident, Israel said, a “routine traffic stop” turned violent when a driver reversed his car into a deputy and another officer fired his weapon at the motorist, striking him in the shoulder. Neither injury was life threatening. Israel said he planned to attend Monday night’s community gathering to speak about both incidents.

“We are working diligently with our legal team to determine exactly why police felt the need to execute him as he ate his supper in the backyard of his house rather than use negotiation tactics,” the statement said.

“We will never forget Greg and we will fight so that his death will not be covered up.”

Crump, an attorney who rose to prominence when he represented the family of Trayvon Martin, the unarmed black teenager shot dead by neighbourhood watch leader George Zimmerman in Sanford, Florida, in 2012, echoed the relatives’ calls for information.

“The family hopes that there is police body camera video or eyewitness evidence that can demonstrate whether this type of force, which they believe was excessive, was actually required,” he said.

“The reason communities of color around America are so enraged is because it seems to be a ‘shoot first, ask question later’ scenario when it comes to police interactions with people from our neighbourhood.”

Friends and relatives were due to attend a community rally at the Greater Bethel Baptist church in Pompano Beach later on Monday to pay their respects to Frazier, a landscaper, with family members and religious leaders planning to address the crowd.

Veda Coleman-Wright, a spokeswoman for the BSO, said the two unnamed deputies had been placed on administrative leave while detectives continued to investigate the case.

“When deputies arrived, someone in the house directed them to the backyard where they encountered the subject who produced a knife. Both deputies fired their weapons,” she said in a statement.