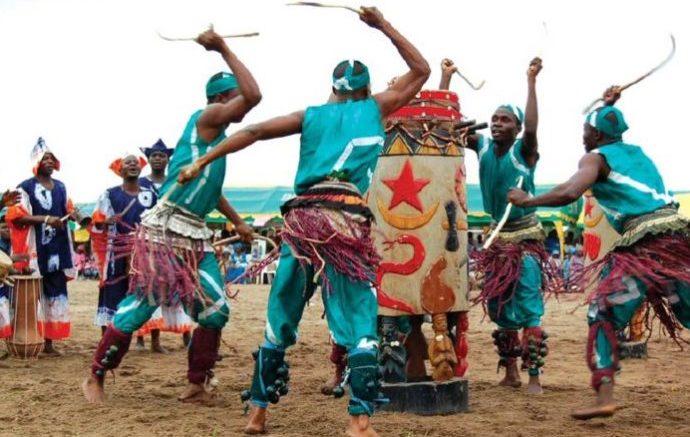 Badagry, the ancient town of Lagos in Nigeria, was last week visited by guests, who came in their numbers to witness this year’s Badagry Diaspora Festival

The 8-day event, which effectively started on Saturday, August 20, with Boat regatta, swimming, fishing competition and other events ended on Saturday 27 with cultural extravaganza, African magic show and music.

Organised by the African Renaissance Foundation (AREFO), a non-governmental organisation founded for the preservation and resuscitation of tangible and intangible cultural and natural heritage of the African people, this year’s event with theme The African Diaspora And The Future Of Africa In The 21st Century, drew speakers from the academia and civil societies to its international symposium held in honour of Olauda Equiano, the slave boy kidnapped with the sister in 1756.

Held at different locations in the ancient town, the yearly event also served as part of events to mark the International Day for the remembrance of Trans-Atlantic Slave Trade And Its Abolition.

Organised by Lagos State Ministry of Tourism, Art and Culture in collaboration with AREFO, the symposium held at the Administrative Staff College of Nigeria (ASCON), Topo, centred on the Diaspora Africans, especially those in the European and American continents.

Kick-starting the symposium, the president of AREFO, Babatunde Olaide-Mesewaku, said the festival in relation to the debates in historic Diaspora is focused on the Diaspora Africans that emerged from the tragedy of Trans-Atlantic Slave, which African leaders in their body languages seem to be regarded as the ‘lost sheep of Africa.’

This group of people according to him are found in their numbers in America, Brazil, the Caribbean Islands and parts of Europe.

He noted that the attention of African governments to the Diaspora discourse from the 21st century has shifted to the contemporary labour Diaspora that dispersed voluntarily in the chase of capital flight to the global North, and virtually nothing is being done about the historic African Diaspora, whose etymology was characterised by violent dispersal, suppression, oppression and coercion.

Disclosing that a very few of these Diaspora Africans have returned on their own to Africa with many still wanting to rekindle relationship with Africa, he pointed out that some of them might not come back to Africa because African leaders are yet to put in place policies that would make them come home to settle.

Revealing what African countries stand to lose for not doing this, he said this group constitutes enormous force in science and technology, the arts, finance, politics and other sectors, which if allowed to come would apply their skill and professionalism to grow the economies of the African continent.

Olaide-Mesewaku, however, noted that the key to gaining from this group of ‘lost sheep,’ is to bridge the gap between them and the various African countries, formulate synergy that would crystalise in the socio-economic and political interaction of African countries and the Diaspora Africans.

He called on Nigerian government and other African countries to enact Diaspora policies that would give automatic citizenship to any member of the historic Diaspora, who desires any African nationality and as well for Nigeria to designate some land space in the various states, including the Federal Capital Territory, as Diaspora Resettlement Village.

Abdur-Rahman Balogun representing the Chairman of the occasion, Abike Dabiri-Erewa, the Senior Special Assistant to the President on Foreign Affairs and the Diaspora, said the contributions from the Diaspora Africa would help resolve the nation’s economic challenges.

Dabiri-Erewa noted that moves are on to encourage this group of people to return home to contribute their quotas, adding that in 2015, Nigerians in the Diaspora through the formal system sent home $21 billion.

She imagined that if the formal methods could record this much that the informal methods might have tripled the amount, adding that this recorded sum is huge and had a great impact on the economy.
She disclosed that government knowing their importance is exploring ways to lure them home to positively impact on the country.

Speaking on Lagos In Diaspora And Tourism Issues, Engr. Sentonji David representing the Speaker, Lagos State House of Assembly, Mudashiru Obasa, said, Lagos State government is set to draw from the huge pool of potentials Diaspora people are promising to Nigeria, especially Lagos to grow the tourism sector and the economy.

He added that Lagos State government is putting up structures, as means of attracting Africans in the Diaspora to the country to invest and grow the state’s economy and also contribute to the development of the country.

He stated that the Diaspora Africans by their exposure, skills and professionalism could help develop the creative and manufacturing industries, improve technology and education.
Sentonji noted that the state government is willing to engage this group of people in any of the sectors, as a means of harnessing their potentials. He added that aside this, the government has opened different platforms for meaningful partnership with them.

The keynoter, Professor Anthony I. Asiwaju, speaking on Africa And Africa Diaspora: A Lived Experience Of The Historical Connection, said there is a large population of Diaspora Africans willing to reconnect with their native homes across the globe.

Citing Bashir Didi, who was able to trace his origin from Latin America to Ketu in Osun State, Nigeria, as an example, he noted that Didi was able to do this because of the various histories that were passed down to him by his parents and grand parents.

He informed that colonialism and slave trade separated communities and families, a reason there are people from Ketu residing in Lagos, Ogun, Osun and even in Benin and Lome.

The University of Lagos don called on African governments to stop thinking of what the Diaspora people can do for them, but how they can contribute to their good. According to him, it is by this means that African countries can create a synergy that would be trustworthy for the Diaspora people to think of home and possibily, think of investing in Africa.

He challenged AREFO to widen its scope and direct its searchlight to Latin America with special attention to popularise and possibly translate Didi’s writings to English language and as well making public his other works.

Commending organisers for keeping the festival going since 1999, despite its various challenges, he noted that there is a need to rekindle relationships with the Diaspora Africans in Brazil, India and other Asian countries of which little is known.

Saying this, he drew the attention of Lagos State government on the need to renovate and maintain the Brazilian Quarters in Lagos Island and other parts of the state, to serve as part of the landmark site that would attract tourists and also tell some part of the history of the Diaspora Africans of Brazilian descent.

Calling on the Federal and state governments to create the enabling environment for a synergy between the Diaspora Africans and Nigeria, Asiwaju tasked organisers to consider Bashir Didi as the programme’s iconic figure and also to look into how Latin American countries have been able to overcome the challenges of slave trade.

Speaking on Olaudah Equiano 1745-1797: Born In Essaka, Eboe, Tinimah –– Lost Tribes of Benin Kingdom, Barr. Anthony Ashinedu Aroh of Olaudah Equiano Heritage Museum, Essaka, Delta State, stated that most historians, including Nigerians, have not been able to ascertain the right community Equiano came from in Nigeria.

According to him, all the recorded histories about the birthplace of the slave boy are trailed with controversies. Aroh disclosed that Equiano was from Essaka/Ashaka in the Ndokwa area of present Delta State. Though, he raised some dust when he said Equiano, whom he claims came from one of the lost tribes of the Benin Kingdom.

Contributing to the discuss, Dr. Sabayon Olaoluwa, speaking on Nihilist Advocacy For Return And Transcendence: Olaudah Equiano As Extended Metaphor In The Discourse Of Africa Diaspora And Development, said the call for Africans in the Diaspora to return should be on mutual grounds and not on the elephant coming home to be king, only to be killed by the same people that have invited the elephant.

Oluwafemi Kochoni, Vice President, World Council of Pan-Africanism, Republic of Benin, called on Nigerian government to take the lead in creating structures and establishing policy that would encourage Africans in the Diaspora to think of home.

Stressing more on synergy, he disclosed that Nigeria, with its might in Africa and West African sub-region, taking on this leadership role would encourage other smaller African countries to do same and before long, Africa will begin to witness the return of the ‘lost sheep.’