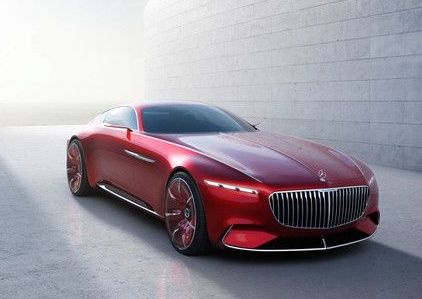 Monterey Car Week is a celebration of opulence unlike any other. Over the course of seven days, cars from the past, present, and even future are celebrated along the sunny California coast, culminating in the world-famous Pebble Beach Concours d’Elegance. There, some of the rarest vehicles in the world are given time to shine, including one-off concepts that have never before seen the light of day.

Many reveals are yet to come, but Mercedes-Benz has just debuted a concept that has “best in show” written all over it. Not literally of course, but at nearly 19 feet long, it’s not like there isn’t room to scribble.

Simply put, the Vision Mercedes-Maybach 6 is stunning. Looking like a supervillain’s personal shuttle, the concept features a long, streamlined silhouette with an extremely squat greenhouse, and as you’d expect from a Maybach, there are unique styling touches sprinkled throughout. Included are a prominent grille inspired by pinstriped suits, camera mirrors, oodles of chrome, and aluminum-spoked wheels with transparent outer covers. Did we mention the gullwing doors? It has those, too.

As for what propels the car, the concept has something special hiding beneath its gargantuan hood — nothing. Instead of the twin-turbo V12 most people expected, the concept is actually electric, meaning the space up front is empty save for two bespoke suitcases. Moving the car are four wheel-mounted electric motors, which produce a whopping 738 horsepower in total. Not only does this make the vehicle all-wheel drive, Mercedes says it will sprint to 60 mph in less than 4.0 seconds . It also boasts a range of more than 200 miles.

Perhaps the most captivating elements of the Vision Mercedes-Maybach 6 are inside the cabin. The unique dashboard wraps around and behind the two seats, resulting in what the automaker calls a “360-degree lounge.” That lounge is accented by a variety of high-tech displays that look like something out of Tron, and the windshield itself actually acts as a digital canvas for driving-related data, navigation info, and infotainment settings. Think of it as a full-size heads-up display. Better yet, many features can be accessed through gesture controls.

Mercedes’ Maybach sub-brand made a triumphant return to form in late 2014 when it announced the Mercedes-Maybach S600, a limousine that measures nearly 18 feet long and starts at $189,350. Coming next for the U.S. market will be the Mercedes-Maybach S550 4MATIC, which launches in fall 2016.