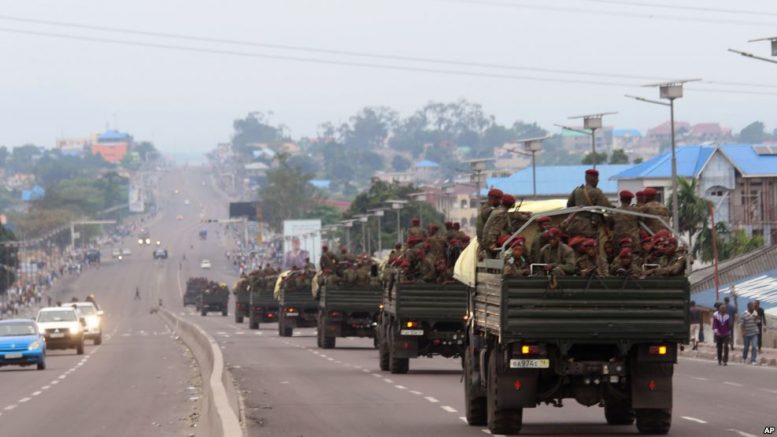 FILE - Congo military trucks carrying Congolese troops drive in a main street after violence erupted due to the delay of the presidential elections in Kinshasa, Democratic Republic of Congo, Sept. 20, 2016.


DAKAR — Congo military “elements” are responsible for digging at least 42 mass graves in three Kasai provinces after clashes with alleged militia members in recent months, the United Nations said as experts were appointed Wednesday to look into a growing crisis that has killed hundreds and displaced more than a million people.

Human rights have deteriorated alarmingly due to the “brutal and disproportionate repression against the Kamuina Nsapu militia by the Congolese defense forces,” the U.N. Joint Human Rights Office in Congo said in a new report.

Congolese soldiers have killed more than 428 people, including women and 140 children, in the once-calm Kasai provinces as of June, the office said. The militia has killed at least 37 people during that time, it said. Map of Kasai Provinces in Democratic Republic of Congo (DRC)

The U.N. said it regrets the “lack of efforts” to ensure independent investigations into the serious human rights violations that have included sexual violence and the use of child soldiers.

The Catholic church has estimated that more than 3,300 people have died in the fighting in the Kasai provinces since the military killed the militia’s traditional chief in August.


Congo’s government didn’t immediately comment on the new U.N. report but has blamed the militia for the mass graves, which the U.N. says number at least 80.

The report also says allegations have come forth since April that a self-defense group, the Bana Mura, may be supported by Congo’s military and that it reportedly has committed a number of executions against civilians associated with the Kamwina Nsapu militia.