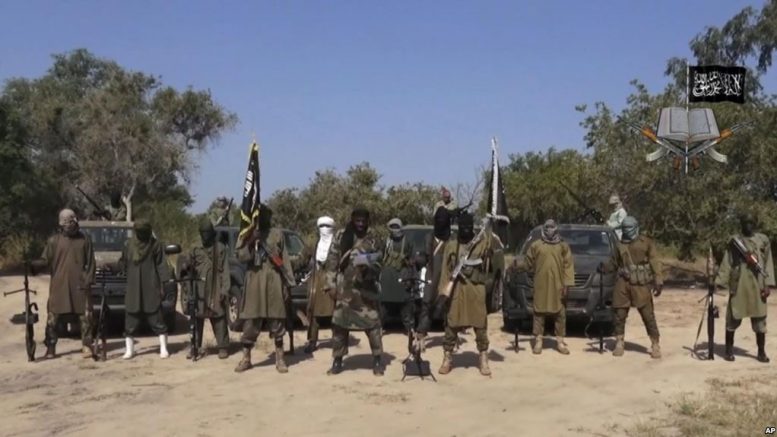 A woman salvages cooking pots at the site of an explosion in Maiduguri, Nigeria, Thursday, June. 8, 2017. At least 13 people are dead after Boko Haram launched the deadliest attack in months on the northeast Nigeria city that is the birthplace of the extremist group, police said Thursday. The attack came just hours before a visit by the country’s acting president. (AP Photo/Jossy Ola)

MAIDUGURI, NIGERIA — Islamist insurgency Boko Haram has claimed responsibility for the attack on Nigeria’s northeastern city of Maiduguri Wednesday night that killed at least 14 people, the first major assault in 18 months on a key stronghold of the militants.

The raid took place six months after Nigerian President Muhammadu Buhari said Boko Haram had “technically” been defeated by a military campaign that had pushed many insurgents deep into the remote Sambisa forest, near the border with Cameroon.

Maiduguri is the center of the government’s eight-year fight against Boko Haram, which has been trying to set up an Islamic caliphate in the northeast.

“We have killed those we can and have left with the bounties of war we are displaying now,” said a voice on a video released by Boko Haram Saturday, showing the group’s fighters among piles of ammunition and other supplies.

“We are hale and hearty, contrary to claims that we have been killed,” the voice said.

The video showed what appear to be Boko Haram fighters moving through the bush with guns and vehicles mounted with heavy weaponry, as well as shots of them holding security passes and other Nigerian military supplies.

“God has enriched us with the arms and ammunition on display, and we shall deploy such weapons we seized against you … the war is still ongoing,” said the video.

“As you look for us in the bush, we shall hunt you in the cities. … There is no dialogue between us, only fire for fire.”

The video also showed a man who appears to be Abubakar Shekau, leader of one of two branches of the jihadist group, standing in front of fighters and weaponized vehicles, speaking Arabic, though the Nigerian military has repeatedly claimed to have killed him.

More than 20,000 people have been killed in Boko Haram’s campaign to establish a caliphate in the Lake Chad basin. A further 2.7 million have been displaced, creating one of the world’s largest humanitarian emergencies.

Despite the military liberating cities and towns, much of Borno state remains off-limits, hampering efforts to deliver food aid to nearly 1.5 million people believed to be on the brink of famine.

The World Food Program is scaling back plans for emergency feeding of 400,000 people in the region because of funding shortfalls.