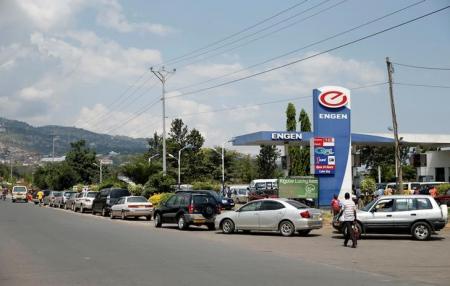 Drivers queue for fuel near a petrol station along the 28 Novembre boulevard in Bujumbura, Burundi, May 30, 2017. REUTERS/Evard Ngendakumana


NAIROBI (Reuters) – Fuel shortages have paralyzed the small central African nation of Burundi, threatening further damage to an economy already moribund after years of political violence and raising questions about the role of the country’s only oil importer.

The shortages, which forced the government to introduce rationing on May 16, have paralyzed commerce and caused food prices to jump by around a third, raising the prospect of a wave of economic migration. More than 400,000 people have already fled Burundi into the volatile central African region.

Anti-corruption campaigners said the fuel shortages became severe after Burundian company Interpetrol Trading Ltd. received the lions’ share of dollars that are allocated by the central bank to import fuel.

“The oil sector is undermined by favoritism and lack of transparency because the rare hard currency available in the central bank reserves is given to one oil importer,” said Gabriel Rufyiri, head of anti-graft organization OLUCOME.

Interpetrol’s lawyer, Sylvestre Banzubaze, said: “I am not associated with the day-to-day operations and only intervene on legal questions. You should address your questions directly to Interpetrol sources.”

He did not respond when asked for further contacts and the company does not have a website.

Rufyiri said that government sources told him that the bulk of dollars for fuel purchasing had been allocated to Interpetrol since March this year.

Reuters confirmed with two other sources that Interpetrol received the bulk of dollar allocations. Other companies only received a small fraction of the dollars they needed, the sources said, severely damaging their businesses.

Earlier this month, South African petrol company Engen confirmed it had sold its assets in Burundi to Interpetrol.

Interpetrol is now the sole oil importer and runs all the fuel storage tanks in the country, said an industry source.

Banzubaze said there was “no link” between Interpetrol’s shareholders and any member of the government.

But a 2011 U.S. State Department report described attempts by senior government officials to pressurize judges into dropping a corruption case against the company, owned by brothers Munir and Tariq Bashir. Neither the government nor Interpetrol’s lawyer responded when asked about the status of the case.

Burundi’s economy shrank by 0.5 percent last year, and the International Monetary Fund expects no growth at all this year and 0.1 percent next year.

Black market prices for fuel range between 5,000 to 6,000 Burundi francs per litre, vendors said, double the official price of 2,200 francs.

In the capital, queues at empty petrol stations snaked around the block. One civil servant said he had taken the last three days off work to search for gas.

“I have no fuel for days and I don’t know if by chance will get it today,” he said, asking not to be named.

Burundi has also been battered by drought and almost two years of political instability. Hundreds of people were killed and hundreds of thousands were forced to flee abroad during the political violence, which still sometimes erupts in low-level clashes.