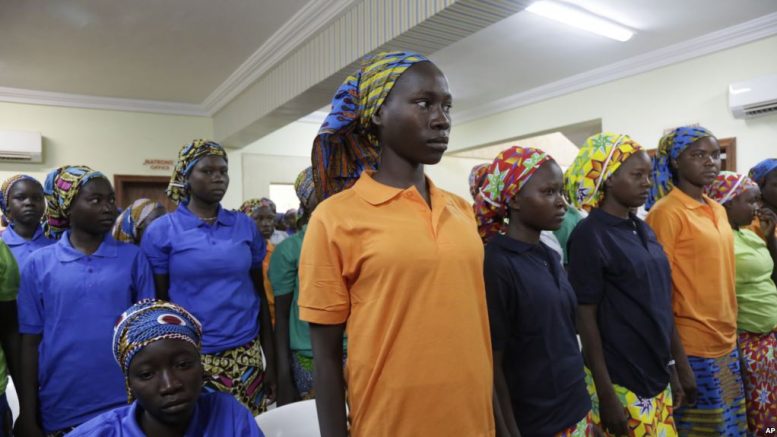 FILE - In this May 8, 2017, photo, Chibok schoolgirls, recently freed from Nigeria extremist captivity, are photographed in Abuja, Nigeria.


Another Nigerian schoolgirl kidnapped by Boko Haram terrorists two years ago is free after escaping her captors.

A spokesman for President Muhammadu Buhari gave no details Wednesday but said Nigerian soldiers found her and brought her to the capital.

Her escape comes two weeks after Boko Haram freed 82 of the girls in a prisoner swap with the government. They are expected to be reunited with their families in the coming days.

The Islamist group kidnapped 276 girls from their dormitory in Chibok in 2014, outraging millions around the world.

Twenty-one others were freed in October, while several others have either been let go individually or escaped.

More than 100 of the girls are still being held.

Boko Haram has killed thousands in its 8-year terrorist campaign to turn northern Nigeria into a staunch Islamic state.

Nigerian officials say they believe the militants kidnapped the girls to intimidate civilians against resistance.
– Ken Schwartz I VOA