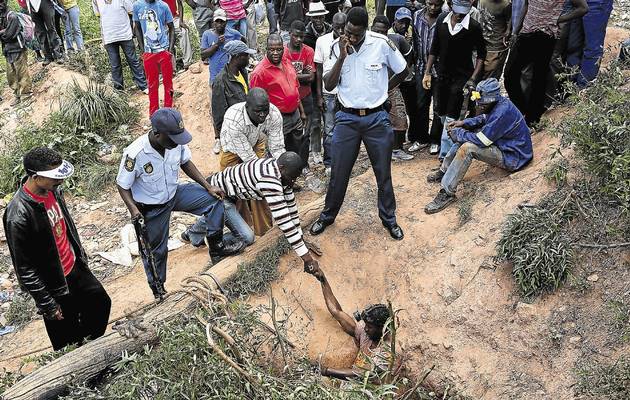 File: The body of an illegal miner is carried after being pulled out of an illegal gold mine in Benoni, near Johannesburg, back in 2014


(Reuters) – Police recovered 25 bodies, believed to be those of illegal miners, from a disused Harmony Gold mine shaft, near an area where 76 illegal miners died in 2009 in what was one of South Africa’s worst mining disasters.

The bodies were recovered from the Eland shaft near the town of Welkom, following a gas explosion late last week, in an area where disused mines without commercially viable amounts of gold still hold enough deposits to attract illegal mining syndicates.

Illegal gold mining has plagued South Africa’s mining companies for decades, robbing the industry and state coffers of billions of rand through small time pilfering as well as networks run by organized crime.

Police confirmed that 11 illegal miners survived and believe that more could still be inside. The illegal miners are known in Zulu as ‘zama-zamas’, which loosely translates as ‘those who try to get something from nothing’.

“There was an explosion that erupted last week Thursday and as a result of that it caused the death of the illegal miners,” police spokesman Major General Lerato Molale said.

He said it was likely the blast was caused by the miners themselves.

The bodies of 76 illegal miners were brought to the surface at the Eland shaft in 2009 following a fire that raged at the mine in the central Free State province.

Sibanye Gold is the first company to set itself a deadline to stop the practice and has vowed to clear all illegal miners from its shafts by the end of January next year.