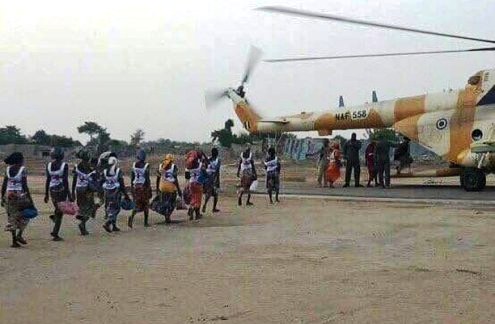 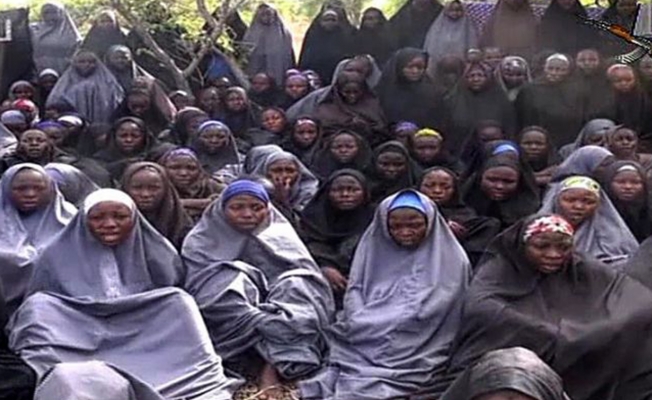 
Background:
Boko Haram fighters stormed the Government Girls Secondary School in the remote town of Chibok on the evening of April 14, 2014 and kidnapped 276 teenaged girls who were preparing to sit high school exams.

Boko Haram extremists in northern Nigeria have released more than 80 schoolgirls kidnapped in 2014 by the militant group in the town of Chibok, near Nigeria’s borders with Chad and Niger.

Nigerian government officials confirmed the releases early Sunday. CNN quoted a government official close to the situation as saying 82 girls were under military protection in the northeastern town of Banki, near the border with Cameroon.

The girls were set to be transferred to the Nigerian capital, Abuja, where they will undergo medical testing before being reunited with their families.

The girls gained their freedom following protracted negotiations between Boko Haram and government envoys. Scores of other girls seized in the Chibok raid are still missing, however.

Authorities say 276 girls were kidnapped from a government-run girls secondary school in Chibok on April 14, 2014. Nearly 60 girls who escaped during the first hours said their abductors forced them from dormitories into trucks that headed toward the bush.

Days later, a widely distributed video purported to show about 100 of the missing girls. Boko Haram claimed the captives had converted to Islam and said they would be released only in exchange for militants held by the Nigerian government. 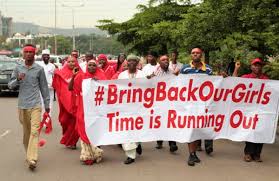 
At the time, Boko Haram leader Abubakar Shekau vowed to sell the girls as slave brides.

The abductions triggered an international outcry, including condemnation from the U.N. Security Council. Michelle Obama, who was then the U.S. first lady, co-launched a media campaign to try to gain the girls’ release.

There was no sign of the Chibok schoolgirls for more than two years, until one girl — by then a mother with a young infant — turned up last May. Two other girls made their way to government-controlled areas later in the year, and a group of 21 captives was released in October.

However, Nigerian Defense Minister Manir Dan Ali told VOA’s Hausa service last month that it might take years to find all of the Chibok girls. He spoke as grieving families marked the third anniversary of the girls’ disappearance, and as government troops searched known Boko Haram hideouts in the Sambisa forest — a vast area extending into three states in Nigeria’s northeast.

Boko Haram, whose declared aim is to create an Islamic state, has killed thousands of people and displaced more than 2 million during its insurgency, now in its eighth year.

U.N. officials have stressed that the Chibok girls are not Boko Haram’s only victims.

The militants have seized at least 2,000 other girls and boys since 2014. Many of those captives were used as cooks, sex slaves, fighters and even suicide bombers, according to Amnesty International.

Boko Haram has increased its use of children as suicide bombers in the Lake Chad region, where 27 such attacks were recorded during the first three months of this year, three times as many as during the same period in 2016, according to the U.N. children’s agency, UNICEF.

The statement from the office of President Muhammadu Buhari was the first confirmation that his government had made a swap for the girls. After an initial release of 21 Chibok girls in October, the government denied making an exchange or paying ransom.
The April 2014 abduction by Boko Haram brought the extremist group’s rampage in northern Nigeria to world attention and, for families of the schoolgirls, began years marked with heartbreak.

Some relatives did not live long enough to see their daughters released. Many of the captive girls, most of them Christians, were forced to marry their captors and give birth to children in remote forest hideouts without ever knowing if they would see their parents again. It is feared that other girls were strapped with explosives and sent on missions as suicide bombers.
As word of the latest release emerged, long-suffering family members said they were eagerly awaiting a list of names and “our hopes and expectations are high.”
Before Saturday’s release, 195 of the girls had remained captive. Now 113 of the girls remain unaccounted for.

The freed girls were expected to meet with Buhari on Sunday in the capital, Abuja.
A Nigerian military official with direct knowledge of the rescue operation said the freed girls were found near the town of Banki in Borno state near Cameroon.
“The location of the girls kept changing since yesterday when the operation to rescue them commenced,” said the official, who spoke on condition of anonymity because he was not authorized to make the announcement.
Boko Haram remains active in that area. On Friday, the United States and Britain issued warnings that the extremist group was actively planning to kidnap foreigners in an area of Borno state “along the Kumshe-Banki axis.”

The 276 schoolgirls kidnapped from Chibok in 2014 are among thousands of people abducted by Boko Haram over the years.
Boko Haram leader Abubakar Shekau, whose fight to create a hardline Islamic state in northeast Nigeria has left at least 20,000 dead since 2009, claimed in a video message that they had converted to Islam.
The mass abduction shocked the world, sparking a global #Bringbackourgirls campaign supported by former US first lady Michelle Obama and other celebrities. It has put tremendous pressure on Nigeria’s government to counter the extremist group, which has roamed large parts of the north and into neighbouring countries.

“This is a very, very exciting news for us that we have over 80 of our girls coming back again,” Bukky Shonibare with the #BringBackOurGirls campaign told Sky TV.
“Their life in captivity has been one that depicts suffering, it depicts the fact that they have been starved, abused, and as we have seen before some of those girls have come back with children, and some of them have also come back with news of how they have been sexually abused.”
Enoch Mark, a Christian pastor whose two daughters were among those kidnapped, said he was told of the latest release by the #BringBackOurGirls pressure group and an official in Maiduguri.
He added: “This is good news to us. We have been waiting for this day. We hope the remaining girls will soon be released.”

The latest negotiations were again mediated by the Swiss government and the International Committee of the Red Cross, Nigeria’s government said.
At the initial release of 21 girls in October, the government said the release of another 83 would be coming soon. But at the three-year anniversary of the kidnapping in April, the government said negotiations had “gone quite far” but faced challenges.
Buhari late last year announced Boko Haram had been “crushed,” but the group continues to carry out attacks in northern Nigeria and neighbouring countries. Its insurgency has killed more than 20,000 people and driven 2.6 million from their homes, with millions facing starvation.
– Associated Press I VOA I Agence France-Presse