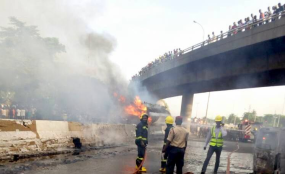 
A 33,000 liters tanker fully laden with diesel has crashed on a car in Lagos, leading to a fire outbreak.

The incident led to spillage of the entire content(diesel) of the tanker, thereby leading to an inferno.

“No lives lost”, an official of Lagos emergency agency said when contacted.