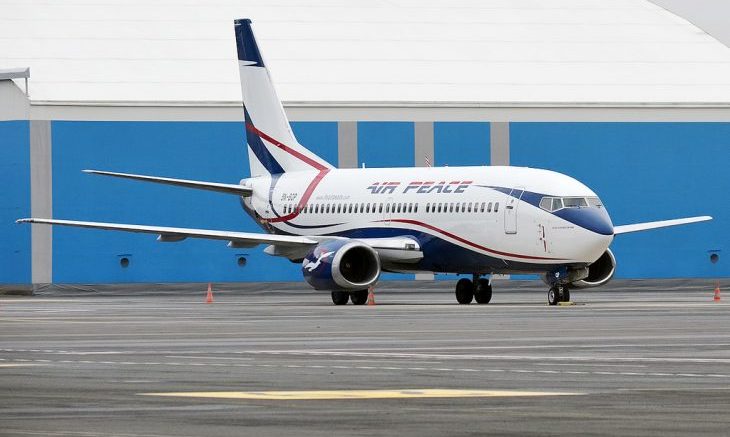 
Air Peace has condemned the attacks on its staff by some passengers in Abuja, Lagos, Calabar and other parts of the country.

The airline in a statement issued by its Corporate Communications Manager, Chris Iwarah, on Friday, warned that it would no longer condone members of the public endangering the lives of its workers.

It regretted that security agent had failed to halt the trend of members of the public invading airport facilities to attack airline workers.
“On Thursday, the winglet of one of our aircraft, which was being towed within the very limited space at the ramp of the Murtala Muhammed Airport in Lagos to position for departure, had a partial contact with the stabilizer of another of our aircraft.

” We subsequently declared the two aircraft unserviceable in line with our high safety standards.

“We were, therefore, compelled to adjust our schedules to close the gaps created by the two aircraft, which were scheduled to do 14 sectors.

“While we were trying to salvage the situation, some unruly passengers took the law into their own hands, preventing passengers from boarding and making it impossible for our aircraft to fly,” it said.

According to the statement, in Abuja, a former top government official, whose flight returned to Abuja when it could not land in Enugu due to the closure of the airport at 7 pm, refused to disembark and incited others to join him in doing so.

The airline said the aircraft was eventually detained overnight in Abuja.

It said, “The action of the former federal lawmaker and other unruly passengers in our different stations worsened the already difficult schedule we were making effort to save.

“Some flights we were prepared to operate despite the challenge we were facing, were eventually canceled.

“While we were making effort to resolve the challenge with the decision to commence our operations very early on Friday, a truck operated by Skyway Aviation Handling Company rammed into another of our aircraft at the Benin Airport and the aircraft was again declared unserviceable.”

The airline said that the aircraft involved in the Benin incident was scheduled to do seven sectors, including the Abuja-Benin service.

It said: “Given the development, we had no choice than to cancel our Abuja-Benin service and asked those who were willing to reschedule for Saturday to do so, while others should be immediately refunded.

“Some passengers, who were to fly with us from Abuja to Benin, however, went violent. They attacked our staff in Abuja and almost killed our duty manager.

“It took the intervention of Air Force personnel, who were reportedly called in by the airport authorities, to rescue our duty manager from the mob.

“But that did not prevent the passengers from destroying our facilities. The menacing passengers also prevented others from boarding their own flights, thereby complicating the situation.

“In Lagos, some other passengers attacked and almost killed our station manager. Also in Calabar, unruly passengers had an unchallenged day, preventing our aircraft from flying.””The situation has, therefore, left us with no choice than to resort to our right of self-defence to prevent our staff from being killed.

“We can no longer tolerate unruly passengers maiming our staff simply because we have chosen to provide service in a very challenging environment.

” Security agencies must, therefore, rise to the occasion before our staff, who are also people’s children and parents, are killed.