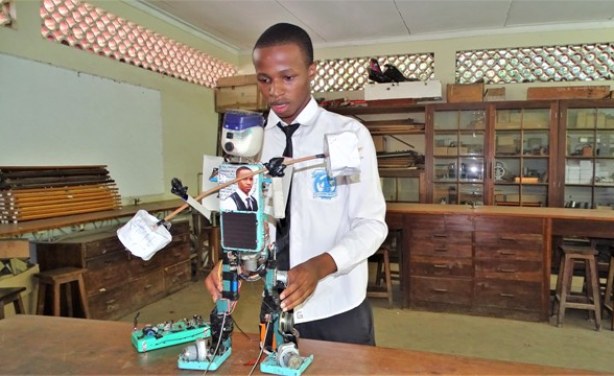 Form six student at Ilboru High School, Gracious Ephraim dispays his solar-powered human robot, which can walk, twist its head and speak at the Arusha-based school.

Gracious who pursues Physics, Chemistry and Mathematics (PCM) combination said he started working on the prototype multitasking human-robot about 12 months ago, using locally available materials as well as simple memory chips for the ‘brain’ The components include an entire Geometrical Set (aluminium box and contents), some wires, tin containers, wire pieces of metal and other materials, all valued at about 200,000/- , which he raised from his own pocket money.

The Robot can bend down to pick two packages and move with the load balanced onto its either arms for a while before laying them down neatly on the ground some distance away through remote programming. Teachers at the school said the student was the only person in the country to build a robot which makes various movements and actually works.

“I am trying to innovate things that can solve problems because, for many years, science students in the country did not want to invent, they were all focusing on getting employed but being a scientist is all about devising and making new things.

Tanzania aims at industrialization meaning that factories and other production lines must work 24 hours, but humans cannot work around the clock, so I envisage to have robots working at night and people during the day, this will also reduce the costs of paying workers overtime,” he pointed out.

The student added that using robots is all about ensuring the high level of effectiveness, revealing that his own maiden robot does things better than some people because when programmed to deposit an item at a particular place it does so with accuracy.

Gracious loves to watch movies like any boy next door, except that his flicks are those about robots, ‘Robocop,’ and ‘Transformers,’ from where he gets additional inspiration.

Regarding his own Robot’s capability to speak, Gracious said he had installed a memory card with recorded voice notes that can be remotely triggered to make the home-made machine reply to specific questions or even sing some songs.

The Head of Physics Department at Ilboru, Mr. Pendaeli Daniel described Gracious as a standout student in the class.

“Always in time, and comes up with new things and ideas.We have written a special letter of introduction to enable him to introduce his innovation to a number of factories and organizations, where he can learn more and find ways to innovate things to complement the robot operations,” said the teacher