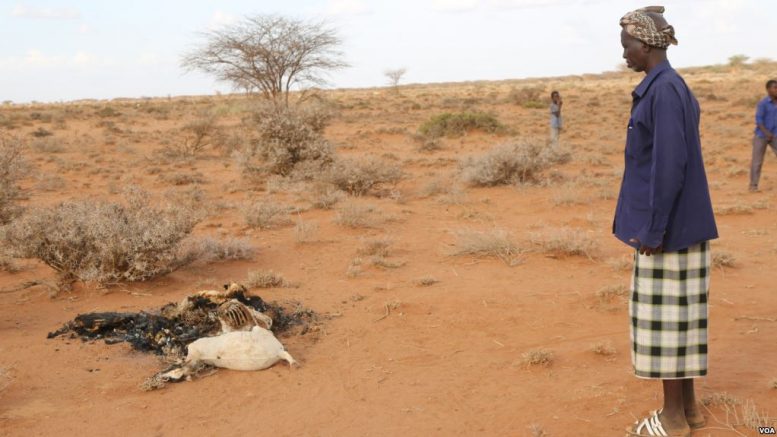 Man looks at carcass of his goats which died due to the severe drought in the Togdher region of Somaliland. (Photo: A. Osman / VOA)


LAS-ANOD, SOMALILAND — Authorities in the breakaway republic of Somaliland say at least 80 percent of the region’s livestock have died due to the crippling drought that has also killed dozens of people and forced thousands into displaced persons camps.

“The situation is very grave as most of the livestock were killed by drought,” said Mohamud Ali Saleban, governor of the Togdheer region, in the town of Buro.

“We are waiting for the rain, but if it does not come in the next few days, we expect the government to declare an emergency,” the governor told VOA.

Officials told VOA that nearly 50 people across Somaliland have died due to drought-related illnesses.

Nomadic communities all across this region said they have never experienced this kind of drought.

Jama Handulle Yassin, a 63-year-old herder, said he has lost more than 280 goats, leaving him with just 30.

“The starvation affected everything, and the situation now is very dangerous where we run for our lives before we die here,” he said. “We appeal to the world to immediately support us.”

Somaliland was affected by the 2011 regional drought that killed an estimated 260,000 people, but that event had its gravest impact in south and central Somalia.

Somaliland declared independence from Somalia in 1991 but is not recognized by any other country.

The current drought has forced tens of thousands of pastoralists to flee from remote villages into towns, where they set up makeshift camps. 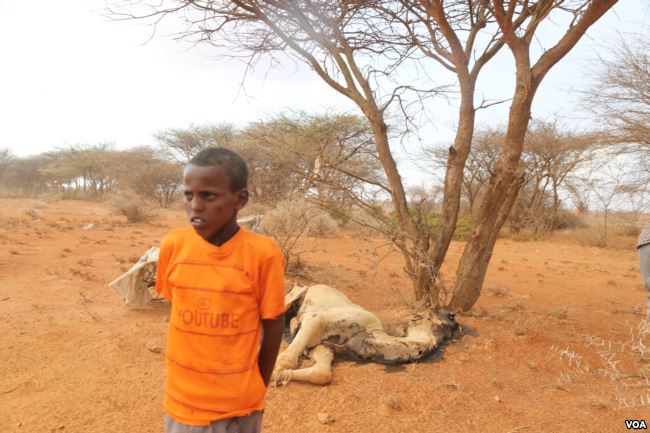 Roble Jama, 13, stands next to the carcass of a camel in Ina-Afmadobe Village, located in the Togdher region of Somaliland. (Photo: A. Osman / VOA)

As water becomes scarce, the drought is forcing many people living in camps outside the town of Las-Anod to drink dirty water.

Standing near the carcass of a camel, Roble Jama, a 13-year-old herder, said his family lost the only camel they had due to drought.

“I have seen when the camel was dying and I felt so sad. The camel’s name was Cadaawe and was nine years old,” Roble Jama told VOA near the village of Ina-Afmadobe.

Roble Jama, 13, stands next to the carcass of a camel in Ina-Afmadobe Village, located in the Togdher region of Somaliland. (Photo: A. Osman / VOA)
The people affected by drought said they have received little or no help from the Somaliland government or aid agencies.

The United Nations recently warned that 6.2 million people across Somalia are facing acute food shortages. More than 1.5 million of those live in Somaliland.