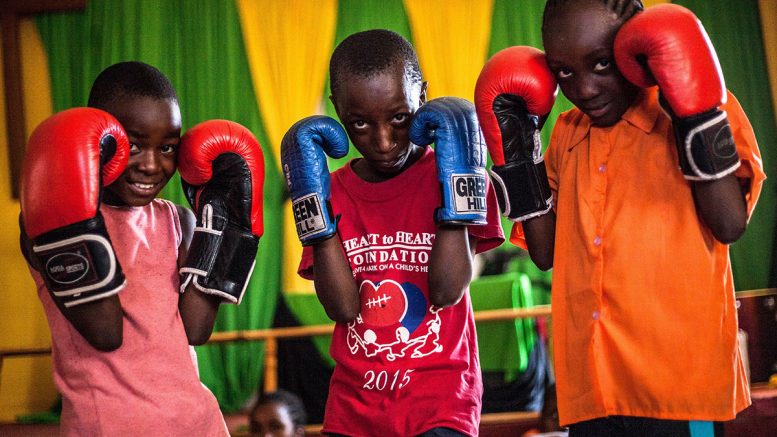 The best part of the training is learning how to be strong and work for what we want to achieve, 'says a participant. (Natalia Jidovanu/ Al Jazeera)


Kariobangi, Kenya – In Kariobangi, one of Nairobi’s toughest neighborhoods, a boxing academy is fighting to empower women and girls while teaching them their rights: to education, self-determination, economic independence, a decent standard of living, respect, and to a life free from violence.

Box Girls was founded in 2008 by Alfred Analo, who is affectionately known as “Priest” within the community.

The academy uses self-defence training to help women and girls become self-sufficient and emotionally and physically resilient. The outcome, Analo says, is that the girls feel safer, more supported and empowered to challenge gender stereotypes within their communities and to stand up for themselves and those around them. 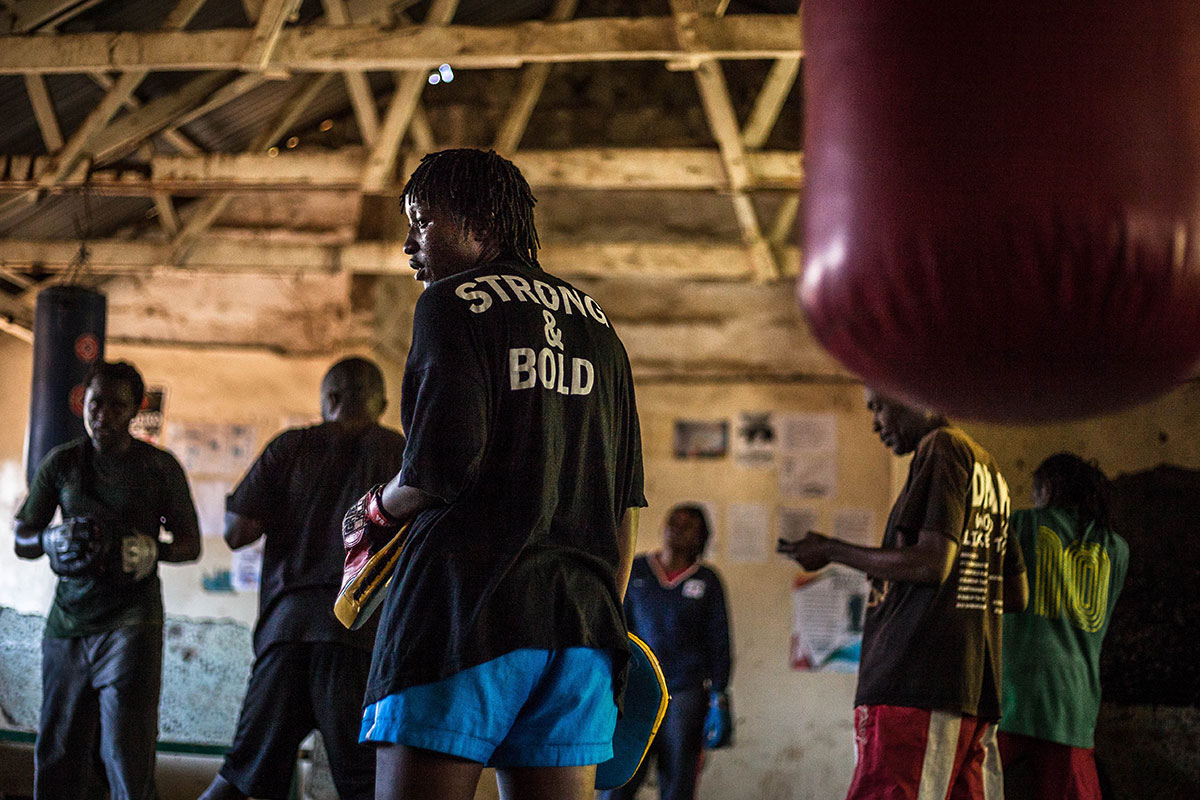 Box [Girls] can help girls build the mental and physical confidence needed to deal with the hard life in the slums,’ says Alfred Analo, or ‘Priest’, the founder of the academy. 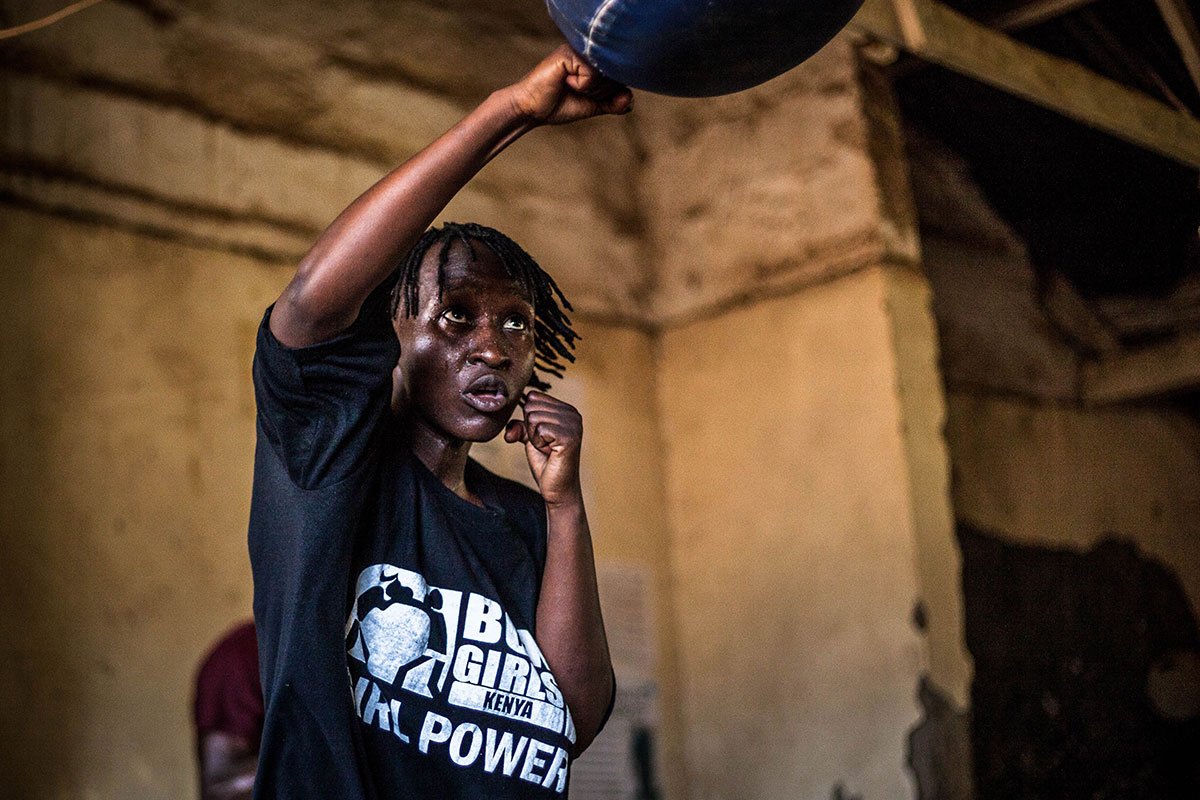 The boxing academy in Kariobangi began with 19 girls in the aftermath of the 2007-2008 post-election violence. Today, Box Girls trains more than 1,500 girls. [Natalia Jidovanu/Al Jazeera] 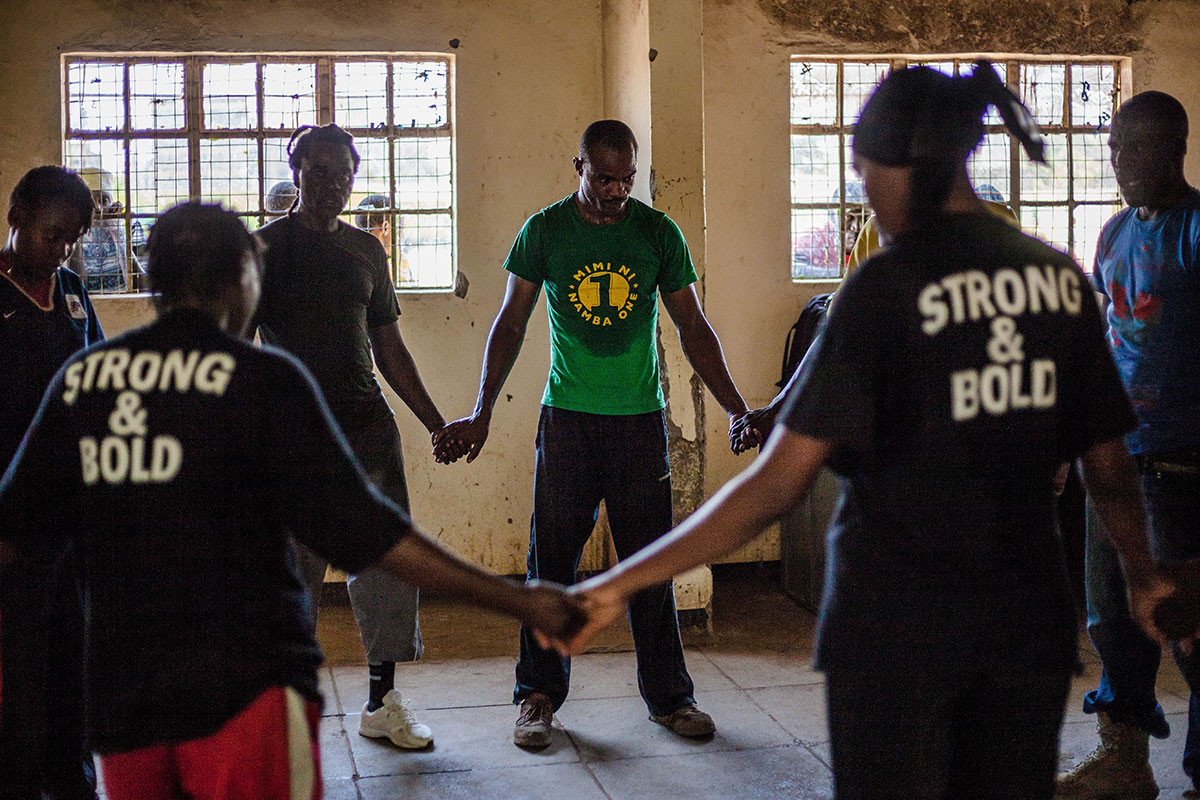 ‘Box Girls was born because there were girls in the community interested in sports and boxing but there wasn’t any coach interested in mentoring them,’ says Priest. ‘It was very difficult to train the girls in the beginning because there was a lot of distrust and misinformation about girls boxing, especially from the parents. Because boxing is associated with masculinity, the parents believed that boxing would make the girls become violent. Eventually I started training a few girls, and more joined later.’ [Natalia Jidovanu/Al Jazeera] 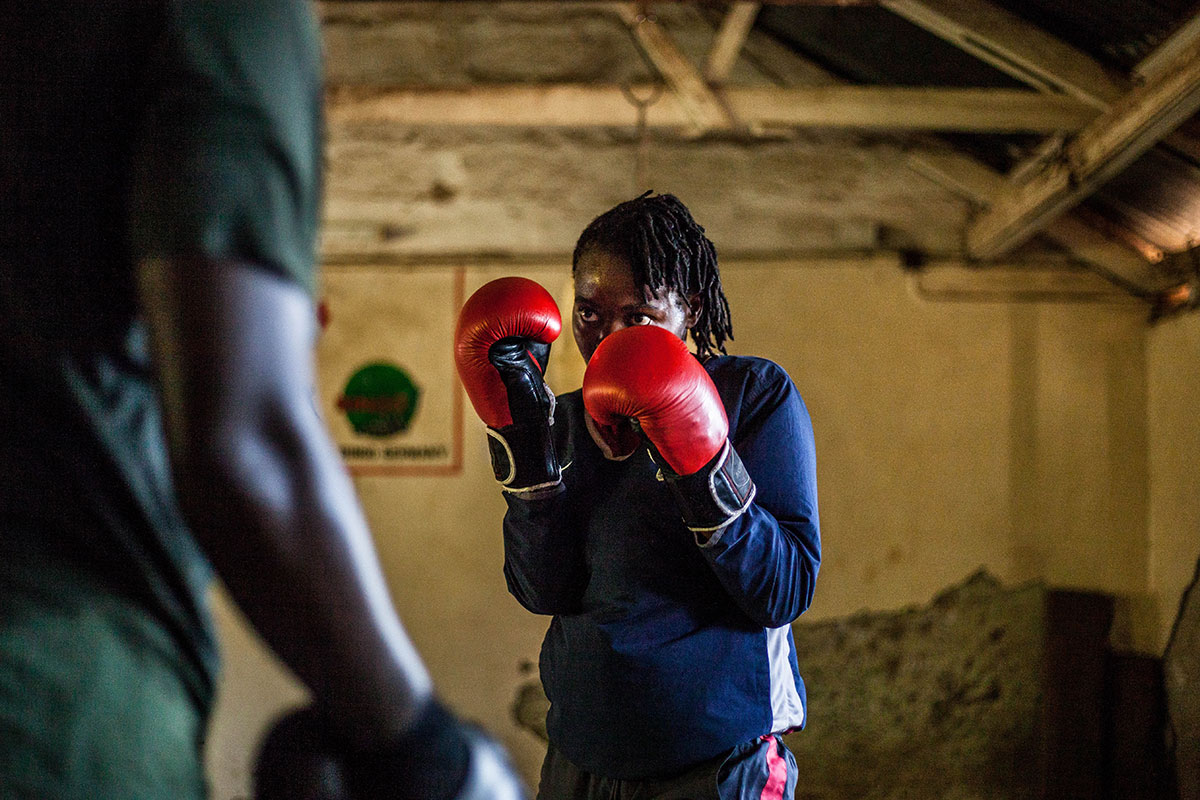 Damaris, a coach in Kariobangi, trains with professional male boxers in the early morning hours at Kariobangi Community Hall, before leading a school outreach session in the community. Box Girls Kenya believes that sports and physical activity programs can be used as a platform to provide girls and women with an education in life skills. [Natalia Jidovanu/Al Jazeera] 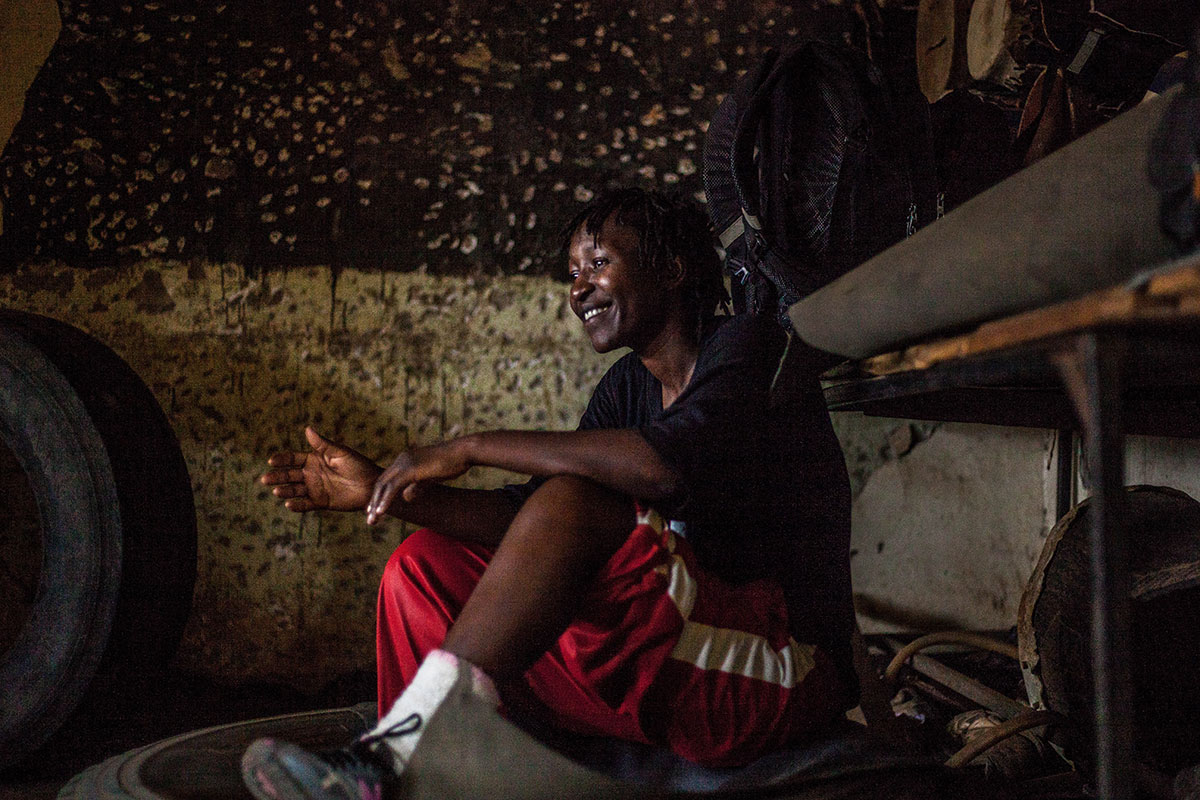 Jane, known as ‘Sonko’, plays an important leadership role at Box Girls, where she coordinates field activities and mentors other coaches who in their turn mentor the young girls. Sonko trains every day. [Natalia Jidovanu/Al Jazeera] 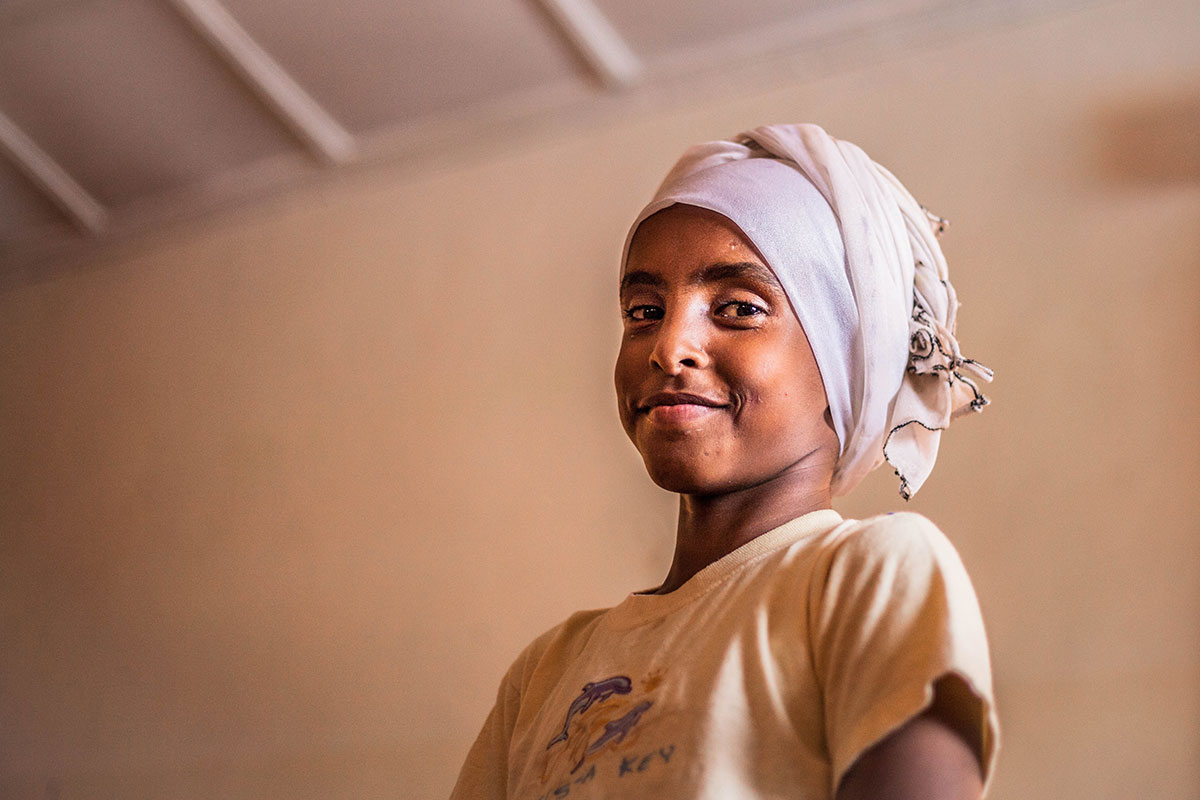 Women and girls face particular pressure to conform to social norms. When communities are confronted with girls practising sports and carrying out physical activities traditionally seen as reserved for boys, the reaction is not always positive. ‘Boxing is still seen as a sport for men,’ says Florence, the coordinator of Box Girls’ mentorship and leadership program. ‘People believe that boxing will make girls and women have aggressive behaviours towards their parents and their husbands. After being exposed to girls and women publicly boxing over time, community members became more accepting of the idea, but we still face lots of challenges.’ [Natalia Jidovanu/Al Jazeera] 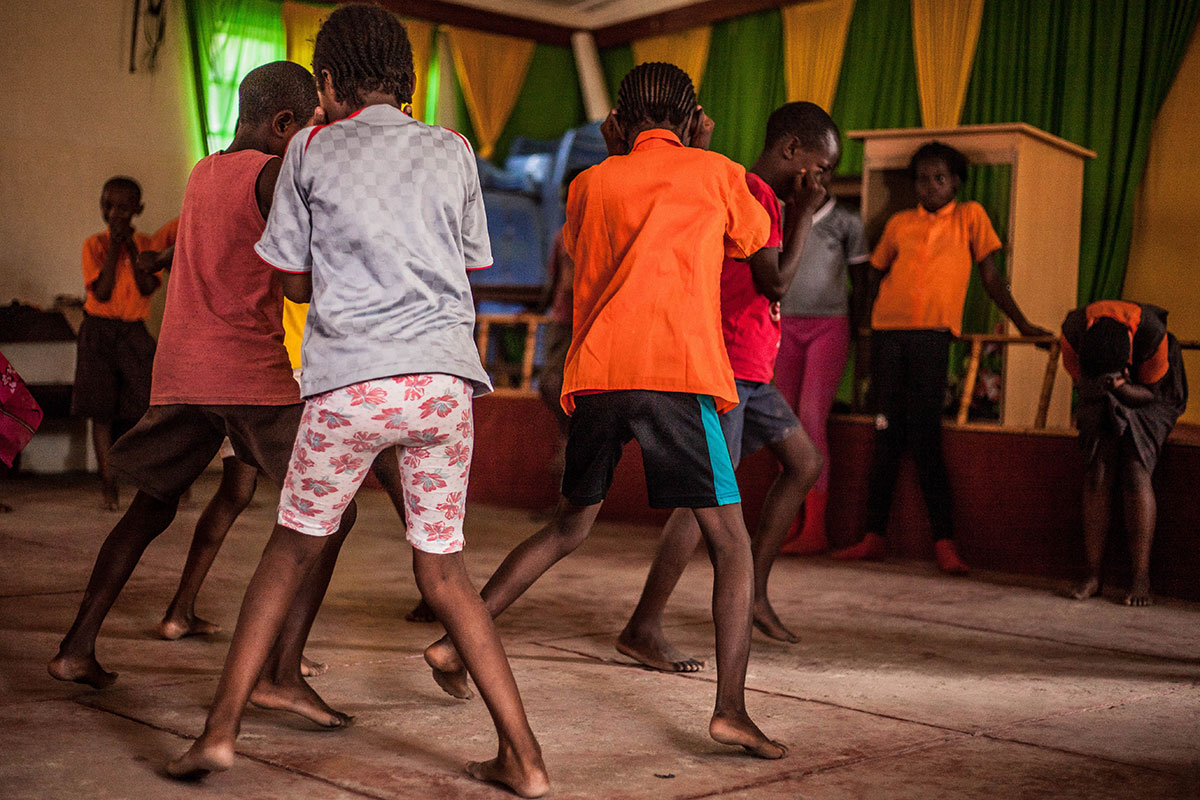 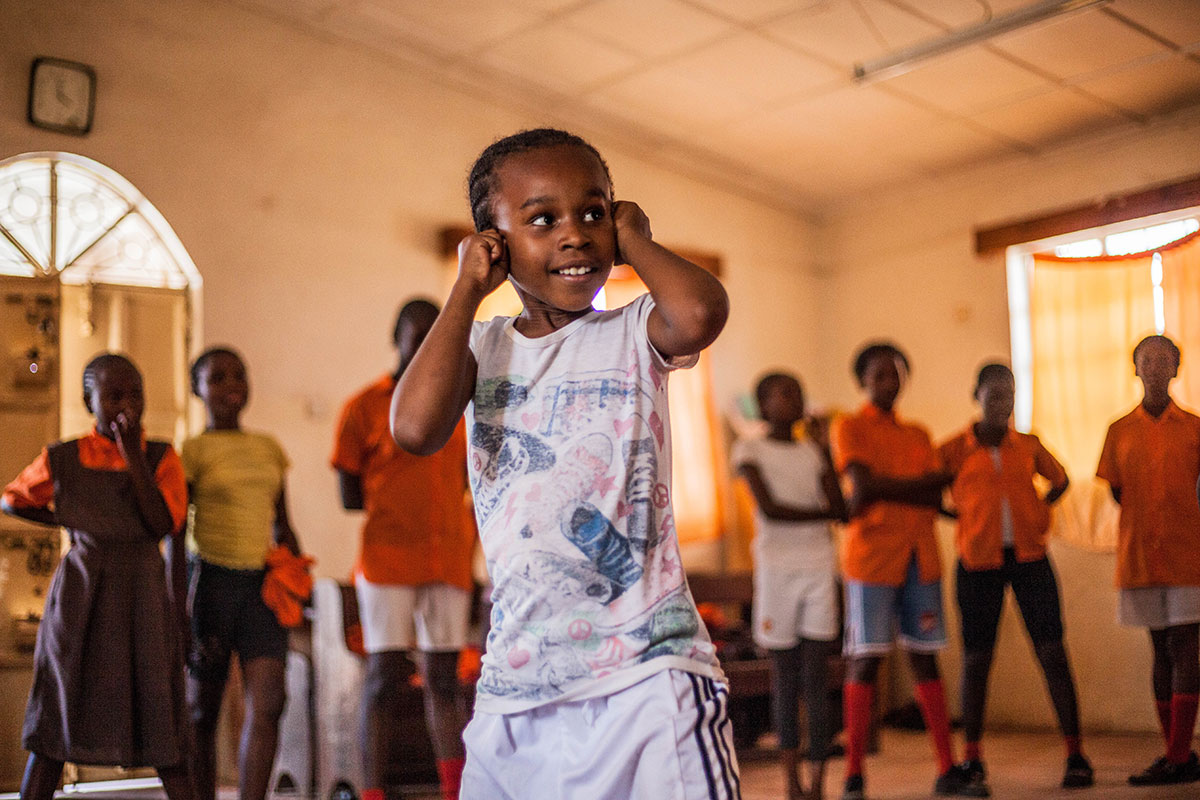 Box Girls’ after-school programme reaches young girls from different zones within Nairobi’s Eastlands area. They participate in self-defence training. The sessions are conducted within the school grounds to ensure a safe and comfortable environment for the girls. [Natalia Jidovanu/Al Jazeera] 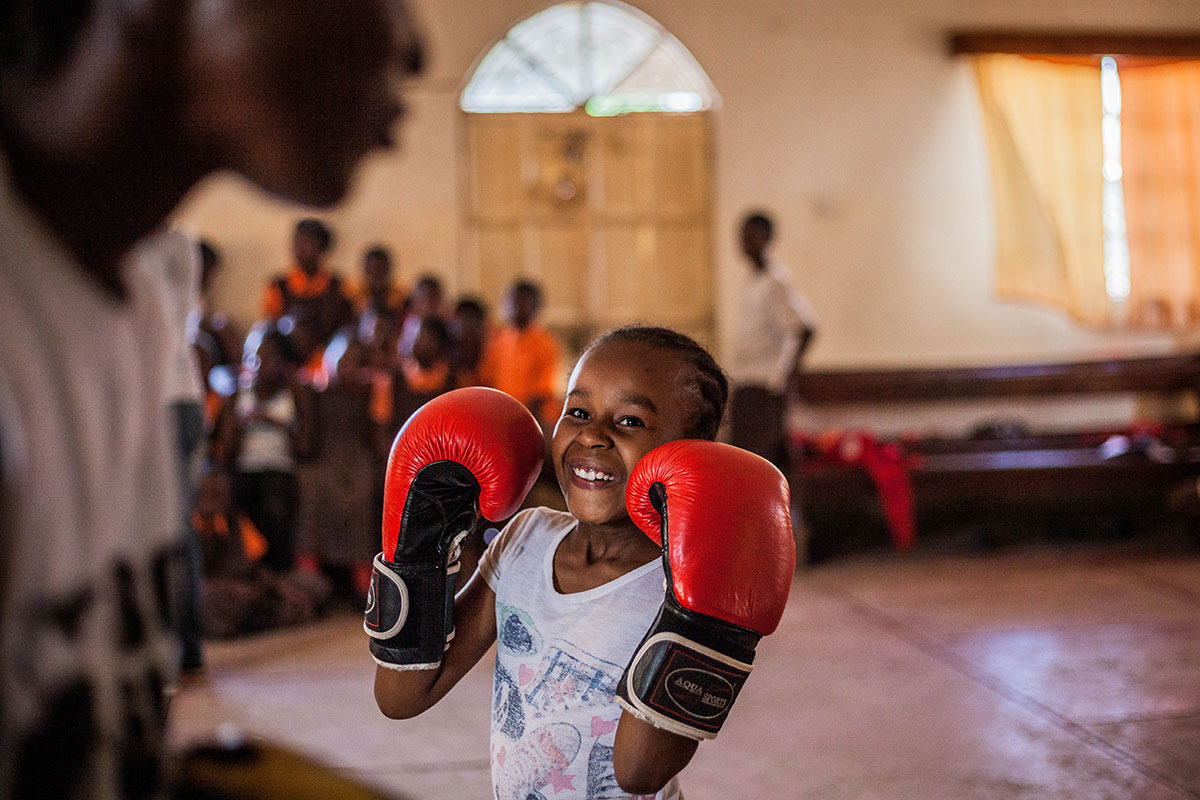 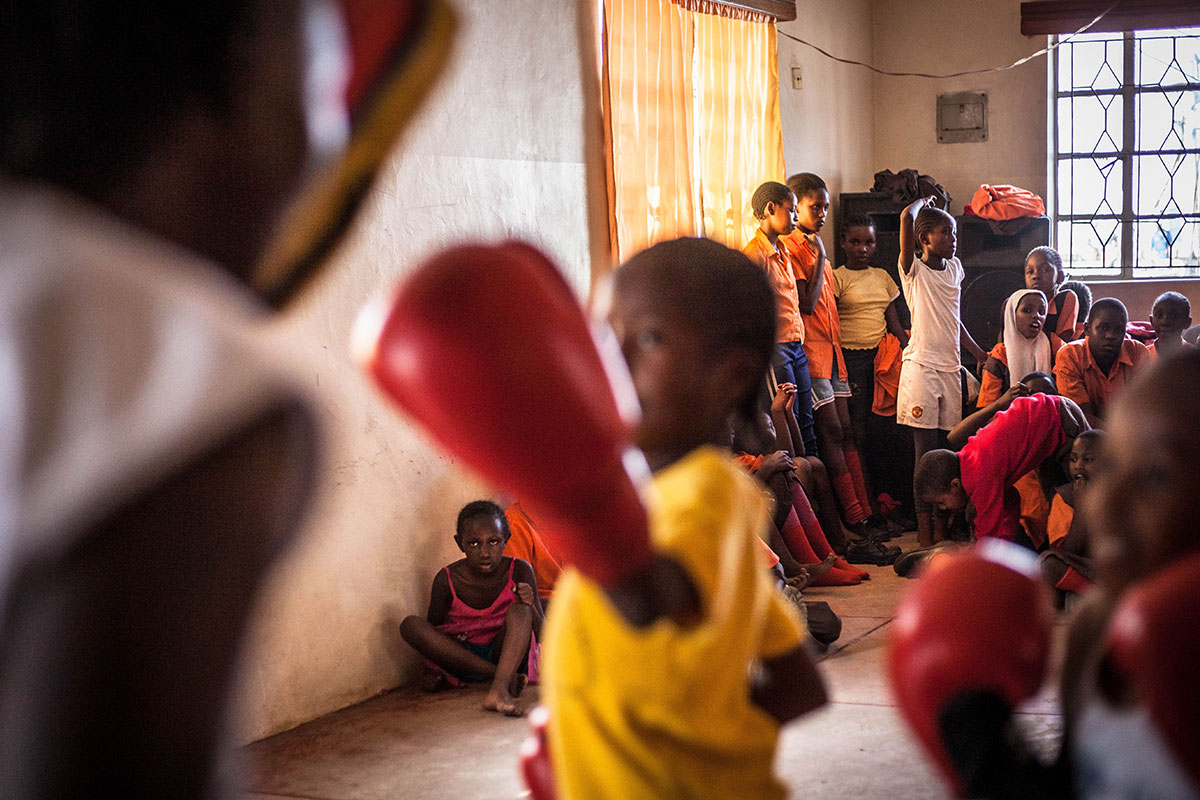 Through the practice of boxing, girls are encouraged to develop a sense of self-awareness and ownership of their bodies. Boxing has helped the girls to develop their self-esteem, confidence and determination. ‘I was shy but in boxing I’ve gained confidence. Now I am strong and confident when I speak,’ says one of the participants in the training. [Natalia Jidovanu/Al Jazeera] 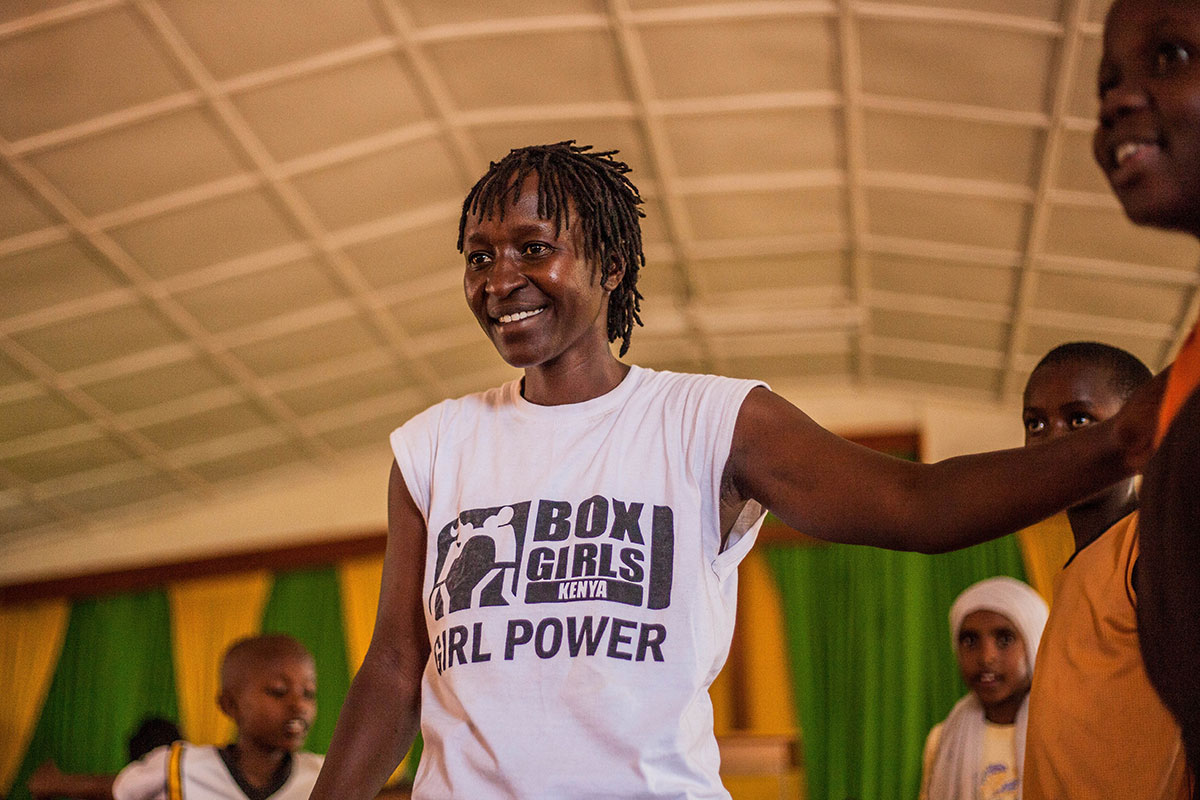 Sonko leads the warm-up and stretching exercises during the outreach session at Rehema Daycare School and Orphan Centre. Female coaches from their own communities play a very important role in the programme as role models for the young girls. [Natalia Jidovanu/Al Jazeera] 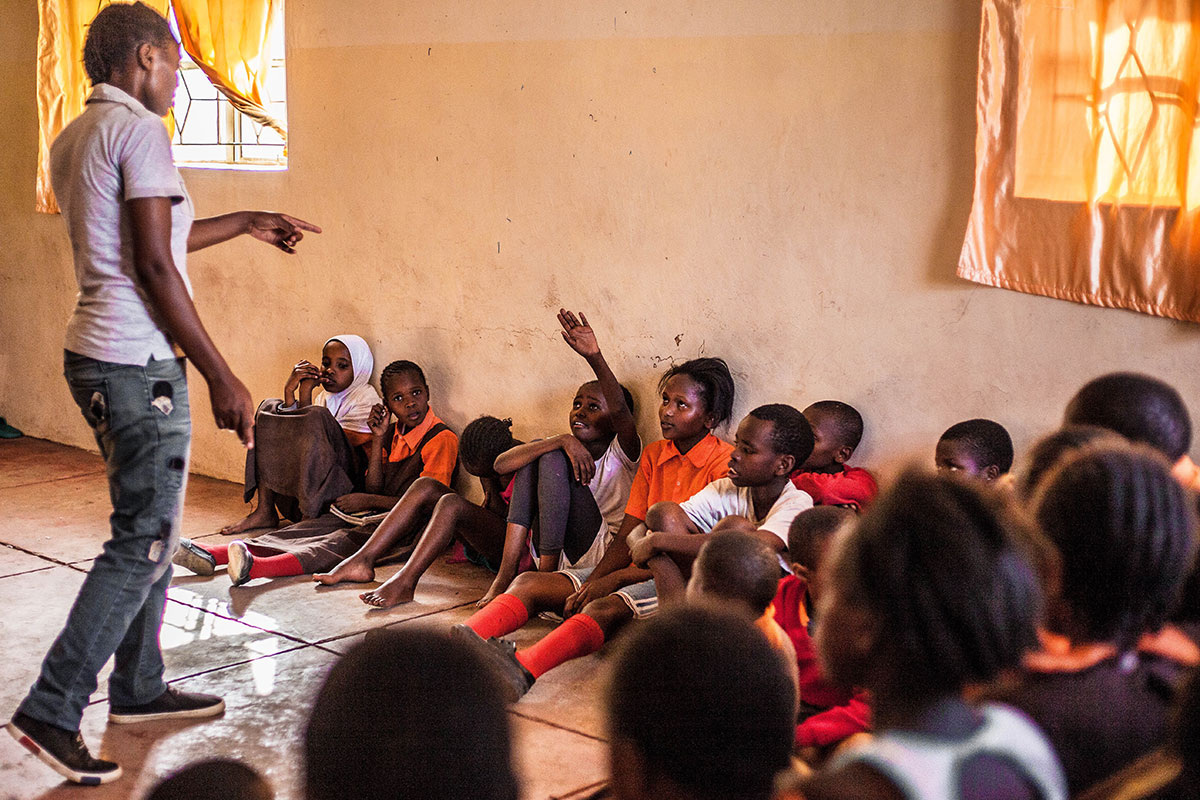 Coach Damaris leads a life skills education session with a group of girls from Rehema Centre in Korogocho. In addition to engaging girls and women in the practice of boxing, Box Girls runs a mentorship and leadership programme that provides the girls with information, life skills training and resources. ‘By making female coaches available to the girls they open up and share their issues. You get girls who face challenges but they don’t want to come out and talk to their teachers or parents because they feel that they will not understand and no action will be taken. During our sessions the girls feel empowered to share and to speak out,’ says Florence, the coordinator of the mentorship and leadership program. [Natalia Jidovanu/Al Jazeera] 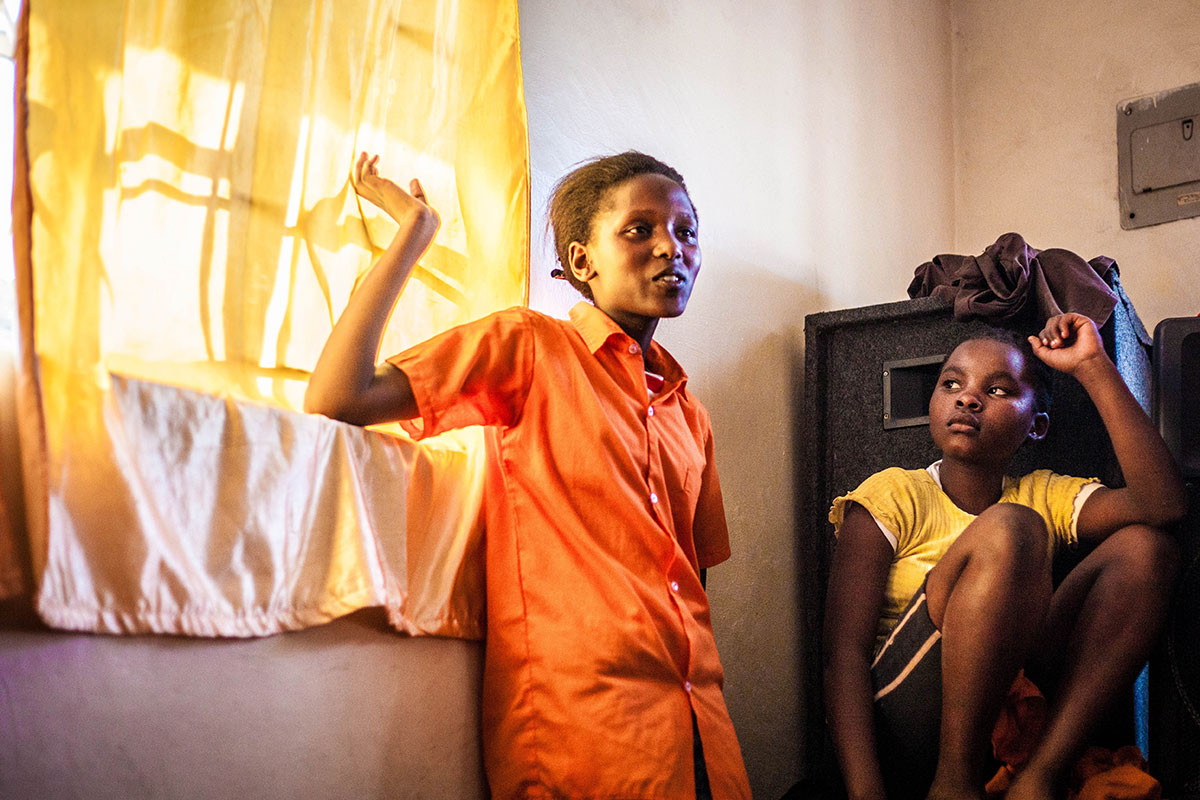 Through life skills education sessions the girls are encouraged to share their experiences with their peers as a way of supporting one another. The life skills training involves confidence building, children’s and women’s rights education and debates about gender roles. The training aims to help girls to acquire communication and negotiation skills and to think critically, solve problems and make independent decisions. [Natalia Jidovanu/Al Jazeera] 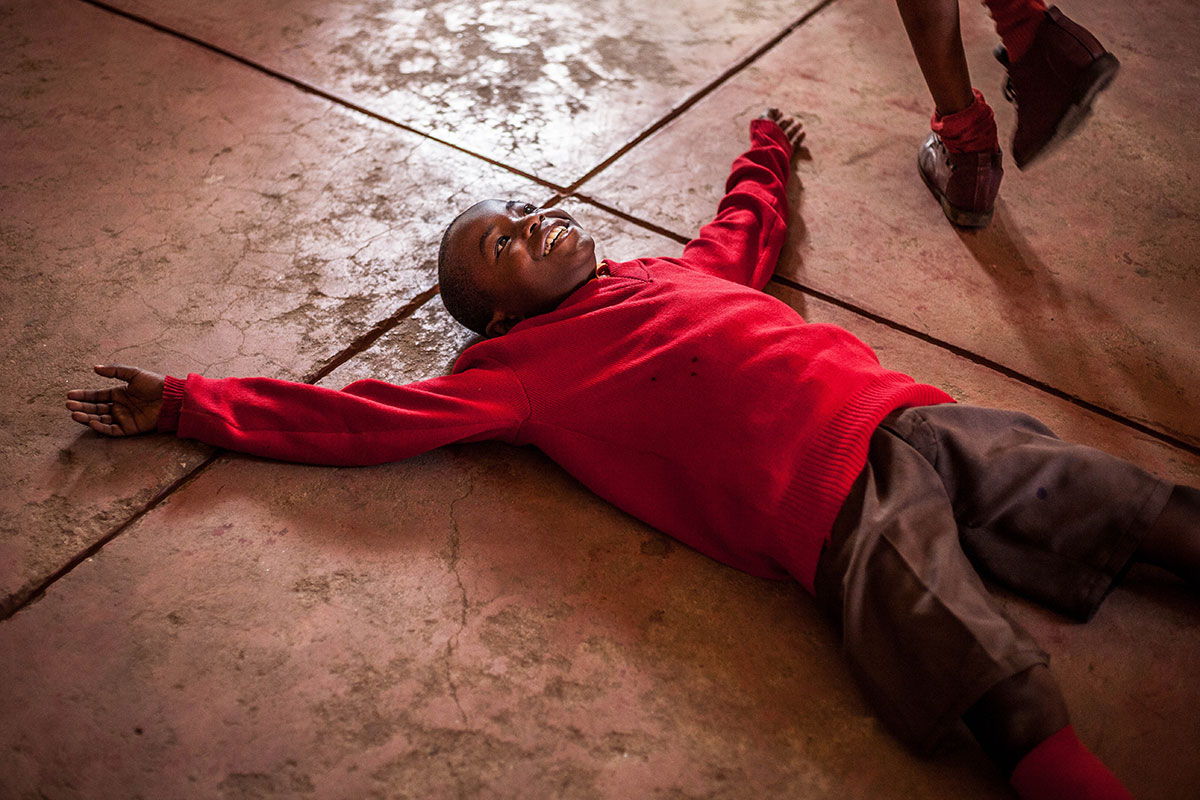 The best part of the training is learning how to be strong and work for what we want to achieve,’ says a participant. [Natalia Jidovanu/Al Jazeera]