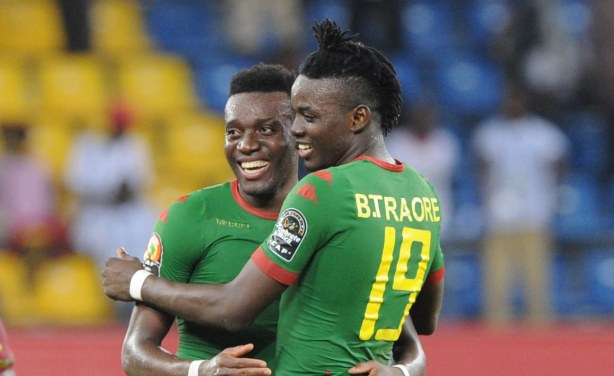 Alain Traore, left, who scored with a superb free-kick to seal the bronze medal for the Burkinabe, celebrates with his brother, Bertrand (no. 19). Photo: Sydney Mahlangu/BackpagePix


Burkina Faso’s 1-0 victory over Ghana in the third-place play-off match at the African Nations Cup finals in Gabon on Saturday exceeded expectations for the winners and heaped more misery on the vanquished.

Alain Traore netted a superb free-kick with two minutes remaining to seal the bronze medal for the Burkinabe, ensuring their tournament was a success to follow on from the silver they won in South African in 2013.

For Ghana it was the third time in four tournaments they had finished fourth. Their game, just like their semifinal loss to Cameroon, was characterized by missed chances and ultimately great disappointment.

Coach Avram Grant, who has been confirmed to be leaving his post after the tournament, gave a run to his fringe players, bringing on the likes of Andre Ayew and Asamoah Gyan only late in the game.

“It has been a good two years with the Black Stars and getting the team to the final and semifinals is a good thing. I am happy with the players who played for the first time,” he said. “I don’t want to speak about me personally.”

The Israeli coach did not want to talk about his future after the defeat, preferring to focus on the players. The side has made a poor start to their 2018 World Cup qualification campaign and now face an uphill task to reach Russia.


For Burkina Faso coach Paulo Duarte the tournament has been a triumph, though he will have disappointing memories of their semi-final penalty shoot-out loss to Egypt where his team were well on top for much of the match.

It is a case of what might have been, though had he been offered a bronze medal prior to the start of the tournament he would likely have taken it, especially after being drawn in a difficult first-round pool that also included Gabon and Cameroon.

He has created a platform to build on, especially considering that two of Burkina Faso’s best players, Jonathan Pitroipa and Jonathan Zongo, were forced home early in the tournament through injury. What a difference they could have made in the latter stages of the competition.

The question now is whether Burkina Faso can kick on and earn a first-ever World Cup appearance in 2018. With Senegal and South African in their pool it will be tough, but they have shown in Gabon that on their day they can be a match for anybody.