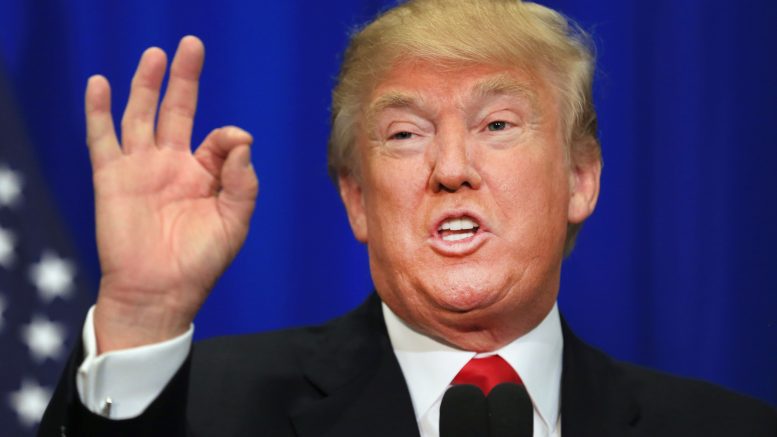 
WASHINGTON (AP) — In the face of widespread criticism, President Donald Trump has staunchly defended his order temporarily banning refugees and nearly all citizens from seven Muslim-majority countries. But in a statement Sunday and tweets Monday, Trump misstated the facts multiple times.

What Trump said and how it compares with the facts:

TRUMP: In a Twitter message Monday, he said “Only 109 people out of 325,000 were detained and held for questioning. Big problems at airports were caused by Delta computer outage.”

THE FACTS: According to a federal law enforcement official briefed on the implementation of the order, nearly 400 green-card holders actually were delayed after arriving at U.S. airports after the travel ban was signed. As of Sunday afternoon, one legal permanent resident had been denied entry as a result of the order, according to the official, who spoke on the condition of anonymity because the person wasn’t allowed to discuss the matter publicly.

Delta Airlines did report a computer problem that forced the cancellation of more than 150 flights on Sunday. The chaos and protests at airports around the country began before that happened and were related to the travel ban, not delayed or cancelled flights.

TRUMP: In a White House statement Sunday, he said “My policy is similar to what President (Barack) Obama did in 2011 when he banned visas for refugees from Iraq for six months.”

The Obama administration did slow processing for Iraqi nationals seeking refuge in the U.S. under the government’s Special Immigrant Visa program for translators and interpreters who worked with American troops in Afghanistan and Iraq. That happened after two Iraqi nationals were arrested on terrorism-related charges. But that year, 618 Iraqis were allowed to enter the U.S. with that special visa.

Government data show that during the 2011 budget year, more than 7,800 Iraqis were allowed into the United States on non-immigrant visas, including tourists.

TRUMP: In the same statement, he said “The seven countries named in the Executive Order are the same countries previously identified by the Obama administration as sources of terror.”

THE FACTS: That is misleading. The Republican-led Congress in 2015 voted to require visas and additional security checks for foreign citizens who normally wouldn’t need visas — such as those from Britain — if they had visited the seven countries: Iraq, Iran, Syria, Sudan, Libya, Somalia and Yemen. This was included in a large spending bill passed overwhelmingly by Congress and signed by Obama.

As the law was enacted, the Obama administration announced that journalists, aid workers and others who traveled to the listed countries for official work could apply for exemptions. There were no special U.S. travel restrictions on citizens of those seven countries.

TRUMP, also in Sunday’s statement: “To be clear, this is not a Muslim ban, as the media is falsely reporting. This is not about religion — this is about terror and keeping our country safe. There are over 40 different countries worldwide that are majority Muslim that are not affected by this order.”

THE FACTS: Trump is right that there are many majority-Muslim countries that have not been included in the travel ban. But he’s also being misleading. The executive order signed Friday does not specifically say Muslims can’t visit the U.S., but it does create a temporary total travel ban for citizens of seven majority-Muslim countries. It also indefinitely bans Syrians.

Former New York City Mayor Rudy Giuliani recently told Fox News that Trump had asked him to create a plan for a Muslim ban that would meet legal tests. Giuliani said he ultimately made recommendations that focused on security and what countries posed security threats.

TRUMP: The president also tweeted, “If the ban were announced with a one week notice, the ‘bad’ would rush into our country during that week. A lot of bad ‘dudes’ out there!”

THE FACTS: The immigration system doesn’t allow the kind of “rush” Trump is describing. There are 38 countries, mostly European, whose citizens can visit the U.S. without a visa. But they must be approved for travel in advance by supplying background information to the U.S. government. Any other foreigner looking to visit or move to America for school or work has to get in line for a visa and be subjected to a variety of background checks, including reviews by federal law enforcement and intelligence. Before Trump’s executive order was signed, some people were eligible to skip an in-person interview if they met a variety of requirements.

And the U.S. can always stop a foreigner from boarding a U.S.-bound flight or cancel a visa upon someone’s arrival. A visa is not a guarantee that a foreigner will be allowed into the U.S.

– Alicia A. Caldwell I AP