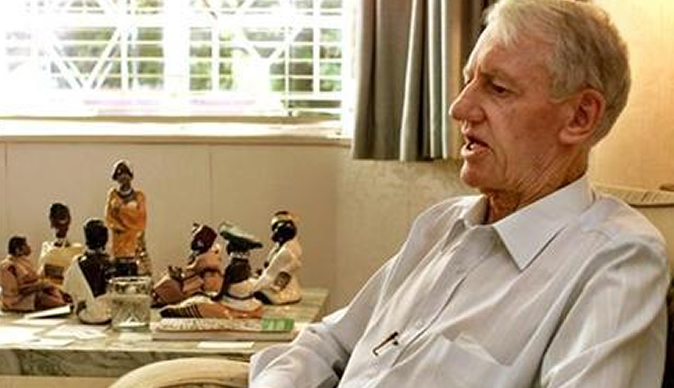 Ian Douglas Smith was the prime minister of then-Rhodesia from 1964 to 1979.

The term was popularized by the famed aviator Charles Lindbergh and is associated with anti-Semitic and Nazi sympathizers who sought to keep the US out of World War II.

But Lindbergh and the America First Committee are not the only 20th century white nationalists to use the term. The small band of racist whites in Rhodesia, now Zimbabwe, employed a version of it as protest against the onset of decolonization and the spread of black rule across Africa.

In the late 1950s, William J. Harper, who was also known for his daring aviation exploits in World War II, made waves by using the slogan

A few years later, Harper struck one of the most dramatic blows for white supremacy as a signatory to Rhodesia’s Unilateral Declaration of Independence. He served as Minister of Internal Affairs in the first cabinet of Prime Minister Ian Smith. Smith famously vowed that the tiny white minority would rule for 1 000 years.

But when Harper first popularized the slogan, which was generally shortened to “Rhodesia first”, he was leading the opposition Dominion Party. The party sought full independence from British rule. It was also at the vanguard of resistance against any movement for reform or genuine integration between settlers and colonial subjects.

The term was particularly controversial as Southern Rhodesia was then governed within the larger Federation of Rhodesia and Nyasaland. This also included contemporary Zambia and Malawi. By advocating for Southern Rhodesian primacy, Harper not only made it clear that he was opposed to majority rule, but also to the federal structure of governance to which Southern Rhodesia was constitutionally bound.

The slogan prompted a split in 1960 between the territorial branch of the Dominion Party, of which Harper was the leader, and the federal branch, led by Winston Field, who became Southern Rhodesia’s prime minister two years later. Field was subsequently booted aside in 1964 for being too moderate.

Echoes of an inglorious past

Harper and his far-right allies sought to appeal to the white Rhodesian electorate by taking a stand against African liberation and the winds of change sweeping into the colony. Similarly, Donald Trump has appealed to an American electorate that feels overwhelmed by the forces of globalization. The Trump administration’s sceptical approach to aid in Africa and antagonism of China is a throwback to the Dominion Party’s protest against providing social services for Africans and its strident warning of a communist onslaught in newly independent countries.

The Federation of Rhodesia and Nyasaland was inaugurated in 1953 with the encouraging, albeit vague goal of promoting racial partnership enshrined in its constitution.

The same year, the moderate, albeit highly paternalistic missionary Garfield Todd became Prime Minister of Southern Rhodesia’s territorial government. (The Federal government was led by the vastly more conservative Godfrey Huggins who reportedly defined “partnership” in the sense of a horse and its rider.

The country’s violent liberation struggle of the 1970s, which saw about 20,000 deaths as the whites refused to accept majority rule, seemed a distant prospect at the time.

But the Federation dissolved in 1963 and the southward march of independence, particularly the chaotic transfer of authority in the Belgian Congo, rapidly radicalized the small white population. Much as Trump promised to his followers the security of a wall on the Mexican border, whites in southern Africa saw the Zambezi river on Zimbabwe’s northern border as a fortress to protect what they called “responsible government” and “civilized standards”.

In 1962 the Dominion Party merged with several smaller conservative parties to form the Rhodesian Front. In the elections that December, the Front, like Trump, defied popular predictions and emerged to form the next government. The Front set about increasing its stranglehold on the government and engaged in widespread censorship of the media. No candidate running on the all-white voter’s roll was ever able to defeat it.

Its key strategy was to position itself as the lone guarantor of white security. A propaganda pamphlet (Rhodesia and You in the Super 70s, available at the University of York’s Borthwick Institute, proudly stated,

In 1962 the people of Rhodesia made their historic decision to stand and fight on the Zambezi; this was in contradistinction to existing trends of surrender and appeasement to the evils of pan-Africanism.

In 1965 the small band of Rhodesians defied world trends and declared their own independence from British rule. Harper, Smith and 10 other white men signed the declaration. Its opening lines contained many similarities of both syntax and content to that of the United States’. Both referred to an “entitlement of separate and equal” rights that were in reality only accorded to a minority.
By Brooks Marmon, University of Edinburgh I The Conversation


The past in the present

While Trump may not be directly inspired by white Rhodesian political strategy, many white American nationalists are. The Charleston church shooter, Dylann Roof, a young white supremacist, posed for pictures while wearing apparel with the Rhodesian flag. He owned a website with the url lastrhodesian.com. According to the historian Gerald Horne, hundreds, if not thousands of white Americans, served as mercenaries in the Rhodesian military in the 1970s.

Harper and Trump’s political careers share another crucial similarity. Both were dogged by allegations of sexual misconduct. While The Donald has been able to deflect the claims against him, Harper was forced to resign from the Rhodesian cabinet in 1968 over claims of an affair with his secretary, a reputed British agent.

As Trump tweets with the hashtag #AmericaFirst, he may not be aware of the Rhodesian antecedent of the term. But it seems to be no coincidence that his campaign tone is not out of line with the sentiments of Harper and Rhodesia’s white nationalists.

Brooks Marmon does not work for, consult, own shares in or receive funding from any company or organization that would benefit from this article, and has disclosed no relevant affiliations beyond the academic appointment above.