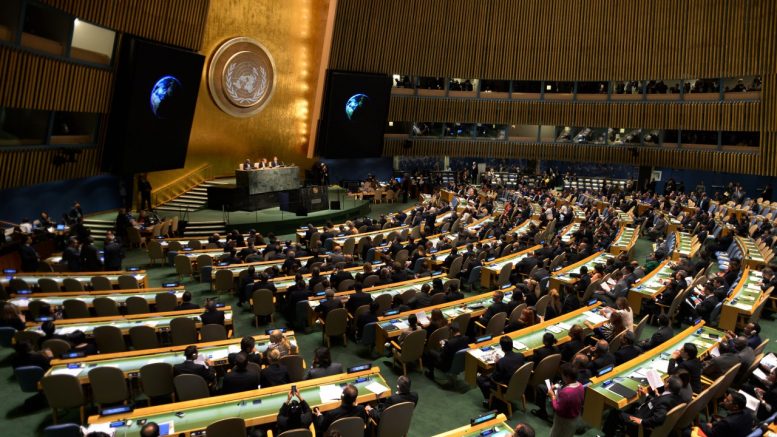 
The Federal Government says the United Nation’s adoption of Nigeria-sponsored resolution on combating illicit financial flows is in tandem with the anti-corruption crusade of President Muhammadu Buhari’s administration.

The Minister of Foreign Affairs, Geoffrey Onyeama, told the UN correspondent of the News Agency of Nigeria (NAN) in New York that the administration’s anti-corruption crusade now has international legal backing.

The UN General Assembly had adopted, by consensus, the Nigeria-sponsored resolution on: “Promotion of international cooperation to combat illicit financial flows in order to foster sustainable development”.

The resolution reiterated “its deep concern about the impact of illicit financial flows, in particular those caused by tax evasion and corruption, on the economic, social and political stability and development of societies”.

Mr. Onyeama said the adopted resolution would greatly facilitate Nigeria’s efforts to have some of its funds stashed in foreign financial institutions, repatriated back to the country.

“The adoption of the Resolution on Illicit Financial Flows is something that is in sync with the anti-corruption policy of this administration,” he said.

“Also, I think we have to congratulate Mr. President because what he has promised to do is to now take this whole issue and get it at the top of the international agenda.

“Getting the anti-corruption crusade at the top of the international agenda is no mean feat.


“So we are really delighted that there is now some international legal backing for this crusade.

“We certainly hope to draw on this resolution to help us in our efforts to have restitution of a lot of Nigerian funds that have been stashed away in foreign countries.”

The Minister also commended the diplomatic skills of the officials at the Permanent Mission of Nigeria for the achievement.

“I think the adoption of this resolution is an excellent achievement. I would like to thank very much the Nigerian compatriots here at the Permanent Mission.

“They have done an excellent work to really push this through.

“It is something that has been talked about for a long period of time and it was never very obvious that it would ever be adopted as the UN resolution.

“So I think that we truly have to recognize the excellent diplomatic and negotiating skills that were displayed by our Nigerian diplomats here in New York to achieve this.”

NAN reports that at the adoption of the Draft Resolution, the Nigerian representative had regretted the impact of illicit financial flows on the country.

“It must be reiterated that illicit financial flows reduce domestic resources and revenues needed to fund poverty eradication programs, provide infrastructure and procure education for our young people, particularly, Nigeria.”

“However, it is our standpoint that whatever that is illegal, constitutes impediment to development, and should be condemned, and combated comprehensively.

“It is pertinent to note that the administration of President Muhammadu Buhari, of the Federal Republic of Nigeria, has taken steps to combat illicit financial flows headlong.

“This resolution therefore, should be welcomed with open arms by all members as part of the global efforts and strategies to bring about sustainable development,” Akinremi Bolaji, Minister Plenipotentiary and Head, Second Committee, had urged Member States.

Mr. Onyeama noted that the resolution had faced initial obstacles and resistance from certain quarters that were seen as recipients of the illicit financial flow and, therefore, did not support repatriation.

NAN gathered that Nigeria coordinated diplomatic negotiations on the Resolution with the African Group and the G-77 including China, for 40 days, and was strongly supported by the two groups.
NAN