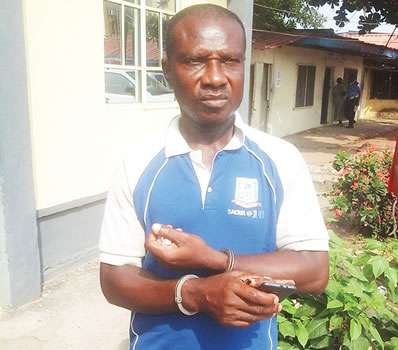 “I do not know what moved me to be sleeping with them. I have been coaching for about 12 years. My wife stays in the South-East. She left me in March 2016. The sex with the boys was not for any ritual. I only derived fun from it,” the alleged abuser said.


Police in Lagos State have arrested a 49-year-old football coach, Frank Darlington, for allegedly having carnal knowledge of his young players.

The Commissioner of Police, Mr Fatai Owoseni, confirmed this on Monday while briefing newsmen on some of the command’s successes recorded within two weeks.

Owoseni said the coach allegedly lured the young players to his house under the guise of seeking their assistance in some house chores.

He said the suspect was arrested on Thursday in Agege area, when two among several of his victims he had molested, reported their experience to their parents.

The suspect confirmed the development to the News Agency of Nigeria (NAN) on the sidelines of the news briefing.

He said: “I always get fascinated to the boys whenever I remember my wife, because it is not easy staying alone without a woman.


“I always make love to these boys through the front and their anus because whenever I feel sexual urge, I would lure them to assist me with some house chores.

“It is not every time I sleep with some of the boys; sometimes I do romance them just to relieve myself of my feelings for my wife.

“I don’t force the boys to make love with them, after I have pondered on my lifestyle I decided to put a stop to what I am doing.

“I have been making love to some of these boys over a year now but during this period I have lost count of numbers of the boys,” ” he said.

One of the victims, who also spoke with NAN on condition of anonymity, said that the coach had slept with him five times.

“The very first time he made love to me was when I went to assist him to fetch water. I was about to leave his house when he ordered me to lie on his bed that we are about to do some exercise.

“To my surprise, he asked me to undress; before I knew what was happening, he had climbed on me and then turned me around and made straight for my anus with his manhood.

“After that incident, he threatened to kill me if I report to anybody about what transpired between us.

“I joined the Super Warrior Football Club, Agege, Lagos, in February 2015 in order to be a great footballer, but after noticing the person of the coach, I stopped going for training,” he said.

Soccer Warriors Football Academy is located in the Agege suburb of Lagos.

The Imo State born coach has two daughters with his ex-wife whom he divorced in March 2016.

The Lagos State Commissioner of Police, Fatai Owoseni has revealed that the suspect would be charged to court at the end of the investigation.