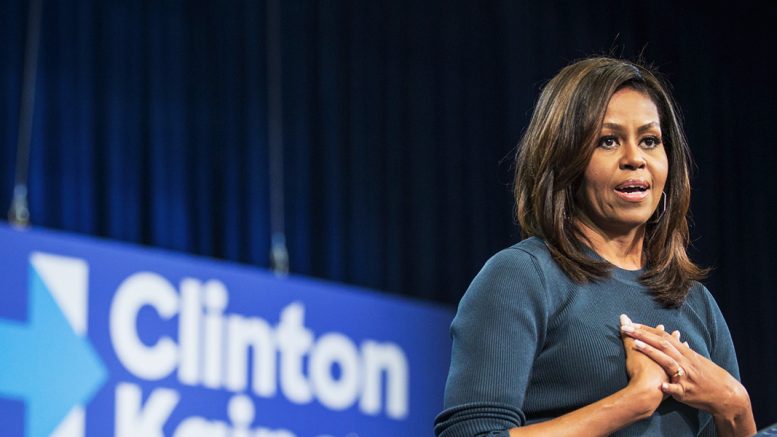 In 2008 and 2012, President Barack Obama’s campaign aides anointed Michelle Obama “The Closer.” This year, Hillary Clinton may well designate her most popular surrogate the starter, the reliever and the pinch-hitter, too.

Since a hot-mic tape in which Donald Trump makes a series of lewd and sexually suggestive comments about women went public, many people have openly expressed disgust in the Republican nominee. But until first lady Michelle Obama stepped on the podium at a campaign rally for Hillary Clinton on Thursday, October 13, 2016 in New Hampshire, no public figure has so effectively encapsulated how this moment has made many American women feel.

Here is full video of the speech by Michelle Obama:

An at-times emotional Obama admitted that she “couldn’t stop thinking about” the comments made by Trump and had to address them in her speech.” It has shaken me to my core in a way that I couldn’t have predicted,” she added. Her speech reflected just how much Trump’s remarks affected her.

“This is not normal,” Obama said at one point. “This is not politics as usual.” At another she insisted that “strong men don’t need to put down women to make themselves feel powerful.”

After carefully honing an apolitical air of authenticity over the past eight years, in part by actively avoiding the harsh spotlight of campaigning, the first lady is disbursing her capital with withering force in the final 26 days before Election Day, aiming to convince the women and minority voters who helped propel the Obamas into the White House to show up one more time.

What Obama did in the speech is put a face and a name — and a very high-profile one at that — to Trump’s words on that bus in 2005. She didn’t say “words hurt” or “words have impact,” but that was quite clearly the message she was sending. Even Michelle Obama, first lady of the United States, knows what it is like to be ogled, to be treated as an object by men.

First Lady Michelle Obama’s speech will go down as one of the most important of this political cycle, a moment in which she crystallized the feelings of many women in the wake of the Trump tape. She was outraged, yes, but also hurt — for herself and for women more broadly. And she expressed all of those emotions in ways you rarely see any politician (or private citizen do) — particularly one as well known as Obama.

It seemed to me — as I watched it live — that she was putting a sort of exclamation point on the past five days, days that have been filled with lewd talk from Trump and a series of allegations by women who say the Republican presidential nominee groped them in the past 30 years. “Enough,” she was saying. This is bad for women, yes. But it’s also bad for all of us.

This speech, along with her address at the Democratic National Convention, are two of the best speeches — maybe the two best — given by any public figure this year. Both, yes, were made by a partisan in support of a partisan candidate for president. But neither felt like the typical party pap. In that speech in July and again Thursday, Obama was able to tap into something far deeper than “Democrat” or “Republican.” She was, in both instances, speaking to a shared humanity that we could all use more of no matter our political inclinations.