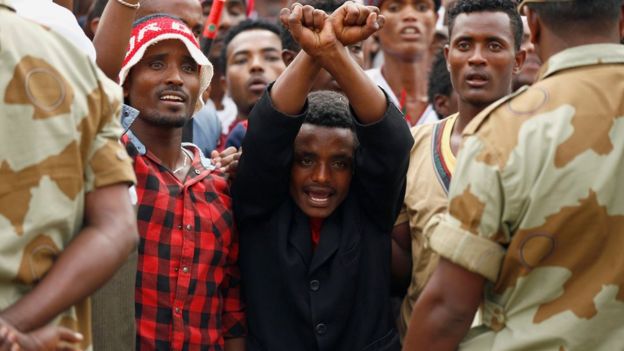 The internet has been shut down in Ethiopia, amid growing protests against the government.

No official reason has been given for the closure.

The internet has been blocked before during previous protests, with the government accusing opposition activists in the diaspora of using Facebook and Twitter to organise protests in the country.

At least 55 people died in a stampede at a religious festival in the volatile Oromia region on Sunday after people starting demanding political freedoms.

Prime Minister Hailemariam Desalegn denied the allegation, saying rioters had caused “pre-planned mayhem” that led people to fall to their deaths in ravines.

The signs of the protests in the areas of Alem Gena and Sebeta were visible this morning – access roads were blocked by stones and a truck was smouldering after being torched last night.

Many people were walking to work or trying to get rides on the few vehicles that were still on the road.

There is a heavy presence of police in riot gear patrolling the areas, which are part of the Oromia region hit by anti-government protests since November 2015.