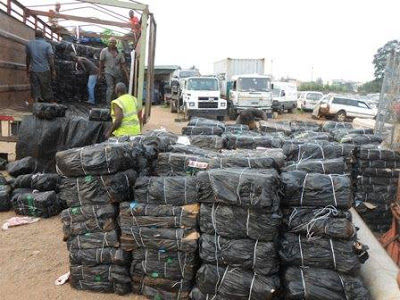 The Nigeria Customs Service, Federal Operations Unit, Zone ‘A’ Ikeja Lagos within the period of July-August 2016 intensified its anti-smuggling operations by intercepting various contrabands with a duty paid value (DPV) of 186,911,500.00

Similarly, the Unit through its interventions recovered 63,555,123.25 from vehicles and other goods due to under-payment, undervalue and false declaration as the case maybe making a cumulative of N250,466,623.25 between July –August 2016.

While commending the relentless efforts of his officers and men of the unit, the Controller, Federal Operations Unit, Zone ‘A’ Ikeja, Comptroller Umar Mohammed Dahiru Said that even though the nation is experiencing economic downturn, smuggling still persists and pledges the commitment of his unit to thwart any antics that might be deployed by smugglers. The Comptroller calls on all patriotic Nigerians to help the Nigeria Customs Service in the fight against smuggling by providing necessary intelligence report that will assist our operations for a better return on investment for legitimate traders

He said “we will continue to reflect and review our operational modalities towards sustaining the statutory mandate of anti-smuggling operations so as to keep the flag flying and warned the dare devil smugglers to repent from their nefarious acts or face the wrath of the law as the Unit has what it takes to always track them down”. He added that 23 suspects were also apprehended and after thorough investigation they will be charged to court of competent jurisdiction for prosecution to serve as deterrent to others.